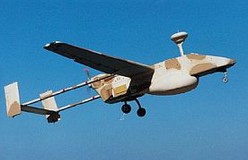 Another IAF drone crashed into the Mediterranean about two weeks ago due to engine failure. The air force’s 669 rescue unit was dispatched to recover the aircraft.