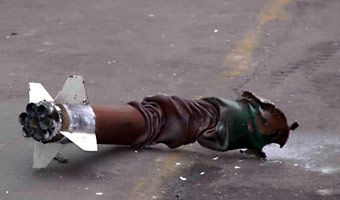 VIDEO LINK BELOW: At approximately 5:00AM IL (Monday, January 12), YWN Editor experienced the frightening sound of the “Code Red”.

Fast asleep in the Holiday Inn located in Ashkelon,  the siren woke up the entire hotel, prompting dozens of people to run for cover in the nearest shelter.

No explosion was heard, and the all clear was given a few minutes later.

One can only imagine what it must be like to live in Southern Eretz Yisroel, and wake an entire family during the night (some nights many times), and run into a shelter….

Shortly after YWN and the HEART Team departed Ashkelon to visit a nearby IDF Base, a Grad Rocket scored a direct hit on a home. Bichasdei Hashem, there were no injuries to the two people who were in the home at the time.