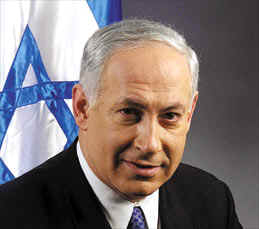 Putting some speculation to rest, Likud leader Binyamin Netanyahu announced on Monday night that if he is elected as the nation’s next prime minister, Yisrael Beitenu leader Avigdor Lieberman will not be a defense minister in his cabinet.

Netanyahu made his remarks during a Channel 1 interview with him and Kadima leader Foreign Minister Tzipi Livni and Labor leader Defense Minister Ehud Barak.

Netanyahu stressed he will turn to all the Zionist parties, meaning all the parties with the exception of the Arabs, to join his coalition.

Making reference to Syria, the Likud leader added he will not make any guarantees regarding talks with the Syrians and the negotiations of Prime Minister Ehud Olmert are not viewed as binding as far as he is concerned.

Escorted by his wife Sara and their children Avner and Yair, Netanyahu on Monday visited the Kosel and stated, “I have one thing to say. With Hashem’s help I will win”.