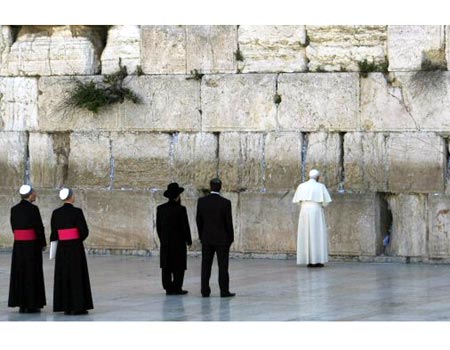 Pope Benedict XVI on the second day of his stay in Eretz Yisrael visited with Islamic officials and Israel’s chief rabbis on Tuesday morning.

The pontiff visited the Dome of the Rock, meeting with PA’s grand mufti. He then made his way to the Kosel. The pope met with the chief rabbis in Heichal Shlomo. He called for a dialogue between the three religions, Judaism, Islam and Catholicism. According to Vatican officials, the pope’s note inserted into the Kosel said “Send your peace upon this Holy Land, upon the Middle East, upon the entire human family,”

The pope told the chief rabbis that in Israel the Catholic community is a minority and the dialogue that is taking place is appreciated by that population. He added “The Church is committed to conciliation between Catholics and Jews.”

Rabbi Yona Metzger Shlita pointed out that if such a meeting would have taken place decades ago, “much bloodshed could have been avoided,” telling the pope of the plight of the Jews, a history of “pain, suffering, expulsions, pogroms and murder. I will never understand why. We will never understand. I tell myself if this historic meeting in which the head of the largest religion in the world meets in Jerusalem with the heads of the Jews – if this had taken place years ago, much bloodshed could have been avoided and much needles hate could have been omitted from the world.”

Rav Metzger thanked the pontiff for “not permitting the Holocaust-denying bishop back into the fold and for the message delivered to Iranian President Mahmoud Ahmadinejad”.

“I must acknowledge with admiration your statement ‘there is no sin against the Jews, but there is a sin against God’. Your predecessor placed a note in the Kosel, asking forgiveness from the Jewish People. As a member of a family, most of which was annihilated in the unspeakable Holocaust, a remnant of that family which was reduced to weakened bones at the war’s end, the family merited to be in Israel and among the builders, and we transformed from ‘bones to independence'” making a play on the Hebrew words for bones (atzmot) and independence (atzma’ut).

“You have just come from the Kosel, the remnant of our Temple, and unfortunately, there are those who turn the house of worship to a weapons storage facility and base for terror. Our generation differs from the previous one and all of the European nations are united. One thing continues to darken the scene for all of us, the continued use of religion to promote killing of innocent people. We must work together to establish an international entity, above the UN, a body of all the religion to permit them to resolve their differences.”

Rav Shlomo Amar Shlita stated, “No other nation has been hounded like the Jews, towards one end, to wipe us out. Nevertheless, we continue to exist and thrive. You, as a representative of a nation of believers and know what the Bible is about. Deliver a message that we the Jewish nation is entitled to survive and receive the minimal respect, the right to return to our Homeland. We pray that G-d should instill in love and peace in the hearts of world leaders.”