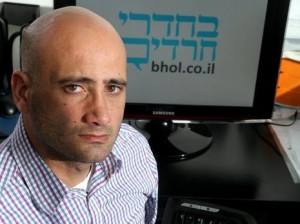 Directors and principals of chareidi mosdos from around the Israel are expected to take part in Wednesday’s urgent kinos addressing the threats of the Internet in general, focusing on chareidi websites. The move is prompted by recent stepped-up calls from Gedolei Yisrael Shlita to close chareidi websites, a move that has resulted in the closure of at least two, Chareidim, and Etrog. In addition, employees of other sites have stepped down, including Dovid Rothenberg, the force behind Chadrei Chareidim and others.

The kinos will address the talmidim of families that have Internet in their homes, as well as those in which a parent is employed in a chareidi website or invested in such a project in any way.

While efforts to combat the internet were made in the past be Gedolei Hador Shlita, this time, it seems this time, the response is increasingly evident. The kinos will take place in Talmid Torah Yechavei Daas located at 17 Ohalei Yosef Street in Yerushalayim. At 8:00pm.

Interestingly, according to a Maariv report, the site Kikar.net is expected to follow the others and cease operation due to the increasing pressure from the rabbonim in Eretz Yisrael.

Back at Chadrei Chareidim, content manage and webmaster Eli Rothenberg has resigned along with his assistant Dov Povarsky, with both selling their shares in the business. The remaining investor and now sole owner is a non-frum Jew, who was the major shareholder all along, Guy Cohen, who during the past two weeks has been running the show, even posting a letter to surfers that he remains adamant in his position and has no plans in shutting the site.

The site remains the most popular Chareidi Hebrew site with its vast forums, perhaps at the heart of the call by rabbonim, with many accusing the forums as being a springboard for loshon hora and the dissemination of unwanted information.

While Cohen was only a business partner, today, the shaven-head boss is the editor and manager of the leading Hebrew chareidi website. The 40-year-old Cohen lives in Bat Yam and has a bachelor’s degree in computer science and has amassed his business experience at a Merrill Lynch unit manager. His company, the one that owns Chadrei Chareidim, Global Networks, also owns other websites, containing content not suitable for this forum.

If one seeks to evaluate the result of the kol korei from the rabbonim regarding the chareidi website, from Cohen’s perspective things could not be better, insisting since the call was issued, during the past two weeks, website statistics are up 30%. He boasts 65,000 unique visits daily on the Chadrei Chareidim site.

He explains there are 90 advertisers on the site, all pleased with the results. “What do the rabbis expect” questions Cohen rhetorically. “Don’t fly, don’t have a cellular telephone, and don’t travel on a bus. Does anyone really believe they can successfully launch a boycott against 90 firms?”

“Once the public realizes the battle is not a pure one, but fiscally motivated, there will be no fight. What is there to fight over? At the end of the day, the chareidi businessmen have much to lose too.

“If it escalates to a real war, then I will take off the gloves and permit those entering forums to post as they see fit and they will have a forum to express their opinions regarding those who seek to run their lives.

“This is a matter of economics. Any newspaper in the world today acknowledges a drop in readership and ads; because of the internet, and the same is true regarding the chareidi newspapers too. They are more than pleased to run the kol korei for the rabbonim.

“Undoubtedly, the rabbonim who signed are indeed respected individuals but it is hard for me to believe that Rabbi Elyashiv, who is 96, actually entered the Chadrei Chareidim site. I have my doubts if a 96-year-old person ever entered the internet at all, or worked with a computer. He accepts what is told to him. If an askan who is in his court says “Rav, the internet is bad” then he accepts it and signs [the kol korei]”.

Cohen draws an analogy to the prime minister, explaining he does not actually investigate every matter prior to making a decision, but makes decision based on information given to him by trusted aides and advisors.

When asked if it is a bit pretentious to regard a kol korei from gedolim as being “financially motivated”, Cohen explained “I am not frum. I am chiloni and I am not bound by their decisions. They are not my spiritual mentors”.

“For as long as the law permits and surfers wish to visit the website — I will continue providing content to the website. At present, not only is the site not waning, but the web traffic is increasing. They themselves are sending a message that they are unwilling to have others tell them what to do. The chareidi public feels it has the right to chose.

“It is as if the rabbonim were to announce one cannot use a automobile since some travel on shabbos. There are those who use cars to commit a robbery or because of their negligence, someone will be killed in a vehicular accident. What will chareidim do, leave their vehicles and return to the days of the donkey.

“It is simply not possible. There is no one that is going to prevent 400,000 visitors a month from entering Chadrei Chareidim and the internet is here to say. It cannot be stopped”.

Cohen goes on to explain that Chadrei Chareidim began as a modest forum under the banner Hyde Park in 2002. It grew rapidly as thousands of chareidim wanted to take advantage of the forum. It did not take long to begin realizing the financial opportunity and things began to move along until two years ago, Global Networks was born, under Cohen’s leadership. Cohen feels one of the attributes that accounts for its growing popularity is the fact that it is a chareidi world that is not run by the rabbonim. He boasts there is no discrimination, no segregation between “Litvaks and Chassidim”, but one online community. He relates to the website as a “virtual Kikar Shabbos”.

When asked by the daily Maariv about the banner headlines regarding the position of gedolim in the daily HaMevaser owned by R’ Meir Porush, Cohen explained “Porush is a hypocrite. He was interviewed on the Chadrei Chareidim site in the past too”. The rabbinical ban is not new he adds, stating the rabbonim came out against the internet a decade ago.

“When Porush ran for the Jerusalem mayoral post, he not only was interviewed on the website numerous times, he also waged a significant election campaign on the internet. HaMevaser can report that many have abandoned the websites but the facts speak for themselves.”

Cohen insists that he knows “for a fact” that Porush still surfs the web, still submits articles to forums and still visits the Chadrei Chareidim website. He feels there is simply no point in waging a public campaign that lacks the backing and support of the public.

Responding to the comments, R’ Meir Porush stated “It is simply not relevant what I think or do or what the askanim think. At present, the rabbonim are working to close the internet and I, as a chareidi Jew, must act accordingly.”

Regarding the decision of Rothenberg to step down, Cohen explains he respects this, a personal decision, one that is in line with Rothenberg’s beliefs.

Seeking to avoid conflict, Cohen is unwilling to disclose the name of Rothenberg’s replacement, a move he feels is beneficial for the time being to keep the pressure to a minimum.