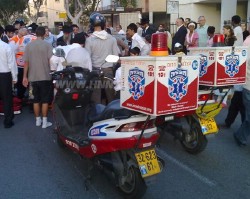 The dispute between the nation’s primary emergency medical service provider, Magen David Adom, and United (Ichud) Hatzolah is far from over, and according to some, is escalating to new heights, involving harassment and threats.

According to a Ladaat.net report, in this week’s shooting death of an IDF soldier by another soldier in a Beersheva Mall as was reported by YWN-Israel, United Hatzolah (UH) paramedic Yuval Yirmiyahu was first on the scene and he began treating the gravely wounded soldier. When Negev District MDA Commander Yehuda Sasson arrived on the scene, he physically dragged him from the scene, leading to the filing of a formal complaint.

According to Yirmiyahu, since the incident, he is being harassed in the form of telephone calls, prompting him to file a police complaint. Today, the threats reached a new height, when Yirmiyahu’s wife opened their mailbox, only to find an envelope containing a bullet on a blank sheet of paper exhibiting the logo of MDA in the southern district. According to the medic, his wife had just returned from taking their daughter to daycare when she got the letter from the mailbox, shocked to find what was contained inside.

The letter and bullet were submitted to police as evidence as the investigation continues.