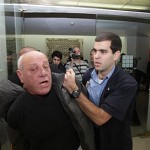 Mr. Pini Cohen, the man who tossed two shoes at Supreme Court President Dorit Beinish on Wednesday remains in custody and he was remanded for an additional five days earlier this morning, Thursday. Working expeditiously, Cohen was already indicted for assault.

The assault, which knocked the justice off her seat and broke her eyeglasses, did not result in serious injuries. She remained in the court and was not taken to a hospital.

The assault also launched a wave of overwhelming support for Beinish, perhaps even boosting her popularity, with the chief justice receiving phone calls from the president, prime minister, former High Court justices and many others.

Security officials are indicating they have increased security around Beinish, and security arrangements in the court building are being reviewed.