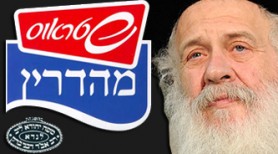 After Strauss made the decision to changeover the mehadrin hechsher of Rav Landau Shlita to Rav Rubin Shlita (), it sparked a boycott against the dairy, which began in Bnei Brak, but it appears it is rapidly spreading. Reports from Kfar Chabad indicate Rav Ashkenazi Shlita has instructed local stores to remove the Strauss products from their shelves.

The growing boycott even earned a prominent slot on the Channel 10 evening news.

The speculation for the changeover has prompted an array of stories and speculation, which will not be covered here.