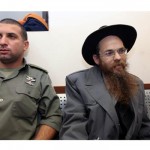 According to Rabbi Yitzchak Shapira, the rosh yeshiva of the Ohd Yosef Chai Yeshiva in Yitzhar, the ISA (Israel Security Agency – Shin Bet) continues to hound him despite the fact a court ordered his release after it became abundantly clear there is no evidence linking him to a Dec. 2009 arson attack in a Shechem area mosque.

The Shin Bet released statements following the rabbi’s release that they are certain of his guilt, but simply lack the evidence to prosecute. The security agency believes the rabbi had advanced knowledge of the attack and is able to identify those responsible.

Rabbi Shapira tells the media that Shin Bet agents continue to threaten him and summon him for questioning. He was questioned once again earlier this week. He was asked questions about his yeshiva, and when he refused to respond, they threatened to summon him daily until he speaks. In fact, he was compelled to appear once again the following day.

“To my surprise, when I arrived they did not question me, they simply threatened me” he writes in his letter to his attorney Naftali Wurtzburger, acting on behalf of the Honenu civil rights organization.

MK (Ichud HaLeumi) Dr. Michael Ben-Ari has called for immediate action to halt the Shin Bet, which continues to “cross red lines in Yitzhar, particularly in the case of Rabbi Shapira”. Ben-Ari has filed a query with Prime Minister Binyamin Netanyahu, compelling a response.

As usual, the left-wing champions of democracy and civil rights remain silent for in this case, the victim is not only a rabbi, but right-wing and a resident of Shomron.