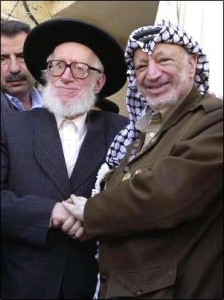 4:15PM IL: Rabbi Moshe Hirsch z”l, the controversial leader of Neturei Karta was niftar in Bikur Cholim Hospital Yerushalayim today, Lag B’Omer, during the afternoon hours. Hirsch was best known for being an outspoken advocate of his extreme anti-Israel hashkofa, tenacious in his opposition to the secular state.

During the tenure of arch terrorist Yasser Arafat, Hirsch served as a member of his government, his advisor on Jewish affairs.

Hirsch was hospitalized about six weeks ago after arriving at the hospital complaining of “shortness of breath”. Details of the levaya will be announced later in the day. There is speculation that the PA (Palestinian Authority) may send a representative to attend the funeral.

UPDATE 6:30PM IL: Kol HaChareidi news is reporting the levaya for Rabbi Moshe Hirsch will begin at 6:30pm in Meah Shearim, from the Yeshuos Yaakov Shul, and from there proceed to Har HaZeisim.

The report adds that a number of PA (Palestinian Authority) officials will represent the PA at the funeral.