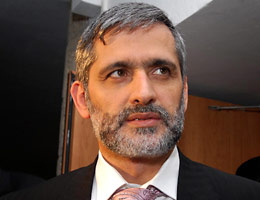 In his first public statements on the recent maelstrom raging in Shas around MK Rabbi Haim Amsalem, party chairman and Interior Minister Eli Yishai for an hour lashed out against the lawmaker who is refusing to return his mandate to Shas, despite its spiritual leadership’s recent decision.

“Nobody knew who he was a minute before he joined Shas,” Yishai said in an interview with Radio Kol Berama, which is affiliated with Shas. Regarding the option of Amsalem forming an independent party Yishai ascertained that “without a rabbinical council of leaders behind him, not even his wife would vote for him.”

Amsalem was recently officially ousted from the party for expressing opinions such as that only a select minority should dedicate their lives to Torah scholarship, while the others should combine employment with study; that non-Jews in Israel from the Former Soviet Union with Jewish roots should be provided an easier way into converting to Judaism; that everyone should acquire the basic skills for mathematics and a foreign language, as provided in the core curriculum subjects; and that Sephardic Judaism should not bow its head before the Ashkenazi Lithuanian haredi leadership, which Amsalem says Shas is doing in its stances on matters of religion and education.

Yishai also refuted Amsalem’s claim that he and others prevented the MK from meeting with head of the Shas Council of Torah Sages Rabbi Ovadia Yosef, in order to truthfully present his stances on Torah scholarship, employment, secular studies and conversions. “There wasn’t even one time that Amsalem wanted to meet with him and he couldn’t,” Yishai said, and added that of recent “Chacham Yosef himself told his secretary he doesn’t want to meet with Amsalem, since he doesn’t listen to him and distorts his opinion.”

Amsalem did not respond to Yishai’s interview.

Earlier on Thursday, Shas newspaper Yom Leyom took the hostilities against Amsalem to new heights, comparing the maverick lawmaker to Amalek, whose memory should be wiped out.

The Knesset officer ordered on Thursday a bodyguard to accompany Amsalem at all times.

Amsalem’s office said in response that “the incitement in wall posters (pashkeviles) and newspapers that are tantamount to wall posters is very severe. The comparison to Amalek has but one meaning that is clear and dangerous. This is certainly not the way of Torah.” Sources close to Amsalem were undecided on the course of action they would take following the alleged incitement, but Idan Abuhav, a private attorney, decided of his own volition to both file that day a complaint at the Tel Aviv police on threats and incitement to violence, as well as write a letter to State Attorney Moshe Lador and Attorney General Yehuda Weinstein asking that they order a criminal investigation into the implicit incitement to violence in the newspaper.