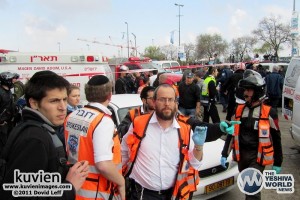 UPDATE 12:33PM EST: [VIDEO, PHOTOS & EARLIER REPORTS POSTED BELOW] One woman died and 50 were injured after a bomb exploded at a bus station in central Jerusalem Wednesday afternoon.

Police said the explosion took place outside Egged bus number 74 at a station opposite the Jerusalem Conference Center (Binyanei Ha’uma) in the center of town.

Fifty people were injured in the attack. Three were injured seriously from the explosion itself, four moderately from shrapnel packed into the explosive device and the remainder were in moderate to light condition.

The  50 injured were taken to Hadassah Ein Kerem, Hadassah Mount Scopus, Bikur Holim and Shaare Tzedek hospitals. All hospitals in the area were opened to receive casualties. One woman, aged 59, died from injuries sustained in the blast.

Police said that this was the first terrorist attack in four years that involved an explosion. Police were looking for one specific person who left the bag that contained the bomb.

There were reports that witnesses were able to identify the man who left the bag and police were searching for him.

Police suspected that an explosive device inside a bag was left at the bus stop, which then exploded.

Public Security Minister Yitzhak Aharonovitch said that the explosive device was between one and two kilograms and was packed with shrapnel.

UPDATE 10:58AM EST: Sources tell YWN Israel that one person who had been critically injured, has R”L just passed away.

Israel’s Public Security Minister tells local media that the device used, was a 1 kg. device placed in a bag on the sidewalk.

UPDATE 10:04AM EST: United Hatzalah tells YWN Israel that as of this report there are a total of 27 injured, 4 serious, 5 medium and the balance lightly wounded, in the bombing of Bus #74, which was en-route to Har Nof.

There are still concerns for secondary attacks. Dozens of United Hatzalah are on the scene and alert in their respective areas.

Additionally, Reuters reports that PM Netanyahu has postponed his scheduled trip to Moscow in wake of THE Jerusalem terrorist attack. Additionally, the Israeli Embassy in Washington D.C. says that the Jerusalem bus bombing was apparently not a suicide-style-attack, meaning that the bomber is still on the loose.

UPDATE 9:58PM EST: Police said that the bomb exploded outside Egged bus number 74 at a station in front of Binyanei Ha’umah. There are a total of 25 injured, 4 of them critical. As of this posting, there are no deaths being reported.

UPDATE 9:32AM EST: A YWN Israel reporter live at the scene tells us that Ichud Hatzolah has treated a total of 25 people injured, 4 of them critical. It is not clear if the bomb was on the bus, or placed next to the bus. Additionally, police fear additional bombs in the area, and the Bomb Squad is searching the area, and have evacuated the area.

9:12AM EST (INITIAL REPORT): An explosion rocked a public bus opposite the central station in Jerusalem on Wednesday afternoon. At least 18 people were wounded in the incident, according to local media.

The entrance to the city has been closed, and ambulances and police forces were arriving at the scene.

Wednesday’s explosion occurred near the main entrance to Jerusalem, shattering windows. People are lying on the ground and taken away on stretchers. The explosion appears to be the first bus bombing in several years and comes amid rising tensions between Hamas militants and Israel.

DEVELOPING STORY – CHECK BACK FOR UPDATES