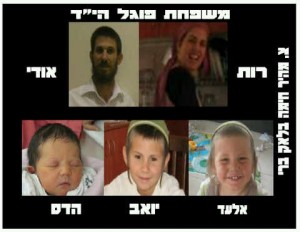 Who is Tamar Fogel? The chances are that you will have no idea. She is a 12-year-old girl who arrived home late on Friday, March 11, to discover her family had been slaughtered. Her parents had been stabbed to death; the throat of her 11-year-old brother, Yoav, had been slit. Her four-year-old brother, Elad, whose throat had also been cut, was still alive, with a faint pulse, but medics were unable to save him. Tamar’s sister, Hadas, three months old, had also been killed. Her head had been sawn off.

There were two other Fogel brothers sleeping in an adjacent room. When woken by their big sister trying to get into a locked house, Roi, aged six, let her in. After Tamar discovered the bodies, her screaming alerted their neighbour who rushed in to help and described finding two-year-old Yishai desperately shaking his parents’ blood-soaked corpses, trying to wake them up.

I found out about the barbaric attack not on BBC news, but via Twitter on Monday. I followed a link there to a piece by Mark Steyn entitled “Dead Jews is no news’. Horrified, I went to the BBC website to find out more. There I discovered only two stories: one a cursory description of the incident in Itamar, a West Bank settlement, and another focusing on Israel’s decision to build more settlements, which mentioned the killings in passing.

As the mother of three children, one the same age as little Elad, who had lain bleeding to death, I was stunned at the BBC’s seeming lack of care. All the most heart-wrenching details were omitted. The second story, suggesting that the construction announcement was an act of antagonism following the massacre, also omitted key facts and failed to mention the subsequent celebrations in Gaza, and the statement by a Hamas spokesman that “five dead Israelis is not enough to punish anybody”.

There were more details elsewhere on the net: the pain and hurt, for example, of the British Jewish community at the BBC’s apparent indifference to the fate of the Fogels. The more I read, the more the BBC’s broadcast silence amazed me. What if a settler had entered a Palestinian home and sawn off a baby’s head? Might we have heard about it then? On Twitter, I attacked the UK media in general, and the BBC in particular. I considered filing a complaint.

The next morning, the BBC’s public affairs team emailed me a response that amounted to a shrug. The story “featured prominently on our website”, they said. It was important to report on the settlements to put the murder in context, they said. In reply, I asked a series of questions: for how long did the massacre feature on TV news bulletins? On radio? On BBC News 24, with all that rolling airtime? Why were the Hamas reaction and Gaza celebrations not featured? And what about the omission of all the worst details?

It was only when I tweeted about their continued indifference that the BBC replied. Then they informed me that the Fogel story had not featured on television at all. Not even News 24. It was on Radio Four in the morning, but pulled from subsequent broadcasts. The coverage of Japan and Libya, they said, drowned it out. Would I like to make a complaint?

Do you know, I think I would. The BBC has long been accused of anti-Israeli bias. It even commissioned the Balen report into bias in its Middle Eastern coverage, and then went to court to prevent its findings being publicised. As a member of the select committee on culture, media and sport, I was at the confirmation hearing of Lord Patten of Barnes as chairman of the BBC Trust. I asked him about political neutrality. In reply, he said that he would give up his membership of a Palestinian aid organisation. Both I and another member asked about bias against Israel. Lord Patten denied any existed. What would he do if shown an example of it? He would ultimately take it to the BBC Trust, he said.

The day after Lord Patten uttered those words, the Fogel children were butchered to almost complete silence from the BBC.

I have asked the corporation to let me know why, if the story was “prominent on the website”, it was not deemed of sufficient merit to broadcast on television, and barely on radio. I have asked them to explain the inaccuracies and omissions in the reporting. And I have asked them what non-Japan, non-Libya stories made it to air, in preference. Twenty-four hours later, I have yet to receive a reply.

Like many of us, I consider the BBC to be a national treasure. I am not a BBC basher; I have never before complained. I do not support nor do I condone the Israeli settlement building. But none of that matters. This is a story about three children and their parents, slain with incredible cruelty, and its effect on the peace process. As a mother, I am shocked at the silence. As a politician, I am dismayed at the apparent bias and indifference. Yes, I will be filing a complaint – about a story I never heard. I hope Daily Telegraph readers will join me.

Louise Bagshawe is MP for Corby and East Northamptonshire.