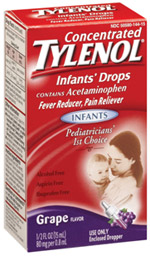 For many years, Tylenol, Motrin and many other liquid over-the-counter medicines produced by the McNeil Company in their Pennsylvania facility have been made with kosher glycerin. Although the Pennsylvania plant was not certified as kosher, this information was welcome news for kosher consumers. [Glycerin is a sweet-tasting liquid and is one of the most kosher-sensitive ingredients used in medicines. It can be produced from either kosher vegetable sources or non-kosher animal fat, and typically comprises 5-20% of the finished product.] In the spring of 2010, McNeil recalled many of their liquid medicines and ceased production of them at their Pennsylvania plant.

This week, the American division of McNeil began distributing grape-flavored Liquid Children’s Tylenol which is produced in their Canadian factory. In the coming months, the company hopes to expand this distribution to include other items as well. [The American plant is not expected to be back in production until the middle of 2011.] The customer service representatives from McNeil informed the cRc and others that the glycerin used in the Canadian plant is derived from non-kosher beef or pork.

Accordingly, we recommend that consumers consult with their local Rabbi to find out if and when it is appropriate to give these liquid medicines to their children.

It is noteworthy that:

■The McNeil Company also produces a liquid version of Extra Strength Liquid Tylenol for Adults (in the Rapid Blast Cherry Flavor) which does not contain any glycerin.
■Many children are able to use chewable tablets which typically do not contain glycerin (although they may contain other ingredients which are less kosher-sensitive).
■The Novartis Company recently introduced a number of varieties of liquid Fever Reducer for children under the Triaminic name. It contains the same active ingredient as Tylenol (Acetaminophen) and its packages bear the OU kosher logo.
■Those who chose to avoid uncertified liquid medicines have the following option: In cases where one is unsure if the glycerin is from kosher or non-kosher sources, they may consume the liquid medicine after diluting it 6 times its volume of water or another liquid. [Please check with your doctor to determine if this will affect the efficacy or safety of the medicine.] For example, 1 teaspoon of medicine would be mixed into 6 teaspoons of water, and then the entire mixture would be swallowed. The explanation for why that is Halachically permitted is beyond the scope of this paper.