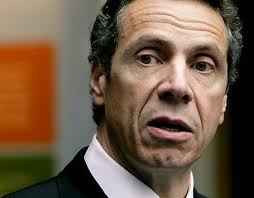 Governor Andrew M. Cuomo today signed into law the NY SAFE Act (Secure Ammunition and Firearms Enforcement Act) that will give New York State the toughest gun laws in the nation. The legislation includes provisions to keep guns out of the hands of convicted felons and potentially dangerous mental health patients, and ban high capacity magazines and assault weapons.

Under the legislation, New York will be the first state in the nation to ban any magazine that can hold more than seven rounds and run instant background checks on all ammunition purchases at the time of sale. The legislation will allow authorities to track ammunition purchases in real time to alert law enforcement to high volume buys, and will include a statewide standard requiring recertification of pistol permits every five years. The legislation also closes a private sale loophole to ensure all gun purchases are subject to a background check, and toughens criminal penalties on those who use illegal guns.

“The new law will limit gun violence through common sense, reasonable reforms that include addressing the risks posed by mentally ill people who have access to guns and banning high capacity magazines and lethal assault weapons,” Governor Cuomo said. “This legislation is not about hunters, sportsmen, or legal owners who use their guns appropriately. It is about reducing gun violence and making New York a safer place to live. I thank leadership of both the Assembly and Senate for their action on this important legislation.”

Key provisions of the NY SAFE Act include:

Mental Health Alert: Under the legislation, mental health professionals will be required to report to local mental health officials when there is reason to believe a patient is likely to engage in conduct that will cause serious harm to themselves or others. This information will then be crosschecked against the new comprehensive, and regularly updated, gun registration database. If the patient possesses a gun, the license will be suspended and law enforcement will be authorized to remove the person’s firearm.

Stronger regulations on ammunition: Under the legislation, New York will have the strongest ban on high capacity magazines in the country, with a limit on capacity of seven rounds, down from the current limit of ten. The legislation includes a ban on possession of pre-1994 high capacity magazines, and will require owners to sell the banned magazines out of state within one year. Existing ten round magazines can be grandfathered in, but may only be loaded with 7 rounds.

To track high-volume ammunition purchasers, the legislation will make New York the first state in the nation to track ammo purchases in real time. All dealers in ammunition must be registered with the State Police, and each sale will require both a state background check and transmission of a record of the sale to State Police, so as to enable alerts of high volume purchases. Ammunition records will be purged within a year of submission. Dealers must report any loss of inventory. The legislation will also include a ban on direct internet sales of ammunition. Ammunition ordered over the internet must be delivered in a face-to-face transaction with a firearms dealer and the purchaser will be subject to the state background check. The Aurora shooter reportedly amassed 6000 rounds through direct online purchases.

Statewide recertification of handguns and assault weapons: The legislation will require individuals who have a handgun license or have registered an assault weapon in New York State to recertify every five years through their county of residence. With this more accurate information, the state will establish an electronic gun permit database that may be run against other databases containing the names of people who will be disqualified from possessing firearms, including those with criminal convictions, involuntary commitments, and those subject to orders of protection, as well as death records.

Webster Provision: Under the legislation, murder of a first responder who is engaged in his or her duties will become a Class A-1 felony, with a mandatory penalty of life in prison without parole. This provision was created to honor the memory of Lt. Mike Chiapperini and Tomasz Kaczowka who were victims of a fatal shooting in Webster, New York, on December 24, 2012.

Extending and Strengthening Kendra’s Law: Kendra’s law will be extended for two years – through 2017 – and the period of mandatory outpatient treatment will be extended from 6 months to one year. In addition a review will be required before a mentally ill inmate is released.

Protecting Families: When a judge issues an order of protection and finds a substantial risk that the individual subjected to the order will use a gun against the person protected by the order, the judge is required to the surrender of the weapon.

Safe Storage: To better ensure that guns are kept inaccessible to those who are barred from possessing them, the legislation requires safe storage of firearms in households where individuals live who have been convicted of a crime, involuntarily committed, or are subject to an order of protection. Existing state law already requires that all guns sold at retail in the state be sold with a gun lock.

Keeps Guns Out of Schools: Under the legislation, the penalty for possession of a firearm on school grounds or a school bus will be increased from a misdemeanor to a Class E Felony. The state’s SAVE Act (Safe Schools Against Violence in Education) requires school districts to develop school safety plans including evacuation, dismissal, community response, and alerting family, law enforcement and other schools in the area in the event of a violent incident or other emergency. The legislation will allow school districts to submit their school safety plans to a newly created New York State School Safety Improvement Team, consisting of representatives from state agencies with relevant expertise (e.g. DHSES, State Police, DCJS), which will review plans and assist localities in developing plans. Some designated safety system improvements will be eligible for enhanced re-imbursement under the state’s School Building Aid formula. New York City, Buffalo, Rochester, Yonkers and Syracuse will be exempted.

Tougher penalties for illegal gun use: The legislation establishes tougher penalties for those who use illegal guns as well as measures to help combat gang violence. Tougher penalties under the legislation include:
· Possession of an unloaded gun will be raised from a misdemeanor to a Class E felony.
· Recklessly injuring a child by a firearm will become a Class D felony
· The purchase of a gun for someone the buyer knows to be disqualified because of a conviction of a crime, an involuntary commitment or other disqualifier, will be raised to a Class D felony from a misdemeanor. This also raised to a class D felony the sale or transfer of a firearm to an individual known to be prohibited from possessing a gun.
· Tougher penalties to permit more effective gang prosecutions, allowing a prosecutor to ask for 25 to life (previously was just 15 years) for an entire group when a gang is involved in murder.
· Using or carrying a firearm during drug trafficking or a violent felony will include a 5 year mandatory minimum sentence if the gun is loaded and a 3½ year mandatory minimum if unloaded. (The Court could impose a lower sentence in drug trafficking cases depending on mitigating factors).
· Sharing a gun with an individual who is not authorized to possess a gun and commits a crime will constitute criminal facilitation.