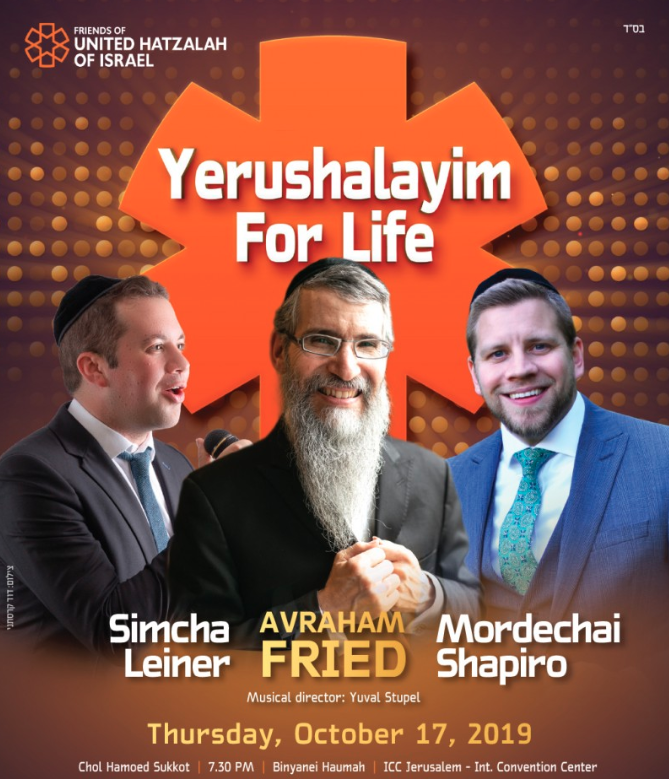 Once again, this Sukkot, United Hatzalah is bringing the top performers in Jewish Music to Jerusalem and is inviting the public to enjoy a great concert and help the organization save lives in Israel. All proceeds from the concert will go directly to supporting the work of the 6,000 volunteer EMTs, paramedics and doctors who put their own lives on hold to rush out and save the lives of others.

The iconic orange vest of the volunteers as well as the organization’s signature EMS vehicle, the ambucycle, have become fixtures in Israel whenever a medical emergency occurs. Having developed a system based on a nation-wide network of volunteers who arrive on average in less than three minutes anywhere around the country, United Hatzalah has reimagined EMS in Israel and created the world’s fastest response time.

The organization, which is completely funded by donations, provides all of its services free of charge. Over the last year, more than 35 training courses have graduated groups of EMTs, totaling close to 1,000 new volunteers, who come from all segments of the Israeli population. These people, men, women, Jewish, Muslim, Christian, Bedouin, Druze and others, all work together and share the common goal of saving lives. “I believe in the power of lifesaving,” said President and Founder of United Hatzalah, Eli Beer.  “Our volunteers, who help others without getting anything in return, have created a groundswell of volunteerism and through their actions, have caused other people to want to get involved. Sometimes patients who recover become volunteers themselves, or the family members and neighbors of the volunteers join. There is so much good that is happening because of our volunteers that it has become a project that everyone wants to be a part of. It has become a never-ending chain of giving.”

Beer spoke about the purpose of the concert. “This concert, that we have held for the last 19 years, is an opportunity for me and for the organization to share this act of giving and lifesaving with the general community. You don’t have to be an EMT to save lives, but at the same time you can help us do that by partnering with us and joining us for a great night of music.”

United Hatzalah’s annual concert will take place on Thursday, October 17th, the 4th day of Sukkot. This year’s lineup of performers will be headlined by fan-favorite Avraham Fried. Joining him will be two rising stars of the Jewish Music world, Simcha Leiner and Mordechai Shapiro. For tickets and information please go to the website www.concertinisrael.com or email [email protected]