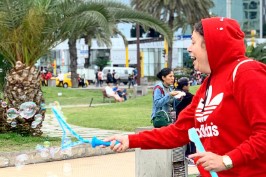 Many of our readers remember when Hodaya Monsango’s face made the news. An acquaintance had offered the naive 26 year old young lady with special needs what sounded to her like a dream come true– To travel with their family on a vacation to Peru in exchange for babysitting assistance. Hodaya’s trusting nature lended her to say yes.

And that was her mistake.

Hodaya hadn’t known that the “family” had smuggled illegal substances into her suitcase. To her horror, minutes after landing, she was forcibly taken away by the Peruvian police to be arrested. Moments later, she found herself sitting in a jail, staring back into the eyes of blood-thirsty criminals.Hodaya is a helpless, religious girl fending for herself in a foreign prison. She is miles away from home. Conditions are harsh in Peruvian prison, mentally and physically, with rough inmates who are thirsty and willing to torment her. Her deteriorating health is causing her family much worry that she won’t make it out alive but the prosecutors are looking for a conviction with 25 years in prison. Thanks to donors they have recently moved her to house arrest but conditions remain far from ideal. Click here to help.

“The longer she stays there, the more she is tormented and abused. She’s in a compromised mental state. Now, we have started to fear for her life,” writes her sister Tehila.

But recently, the Monsango family have felt a faint glimmer of hope: Hodaya’s case has been re-opened by the Peruvian government and if the family pays legal fees involving top-playing lawyers, she has a chance of getting out.  But Hodaya’s desperate parents won’t be able to buy their daughter’s freedom without assistance.

The Rambam rules that redeeming a captive takes precedence over charity for the poor. The Shulchan Aruch states one who delays in redeeming a captive is considered a murderer. Because Hodaya is a girl, halacha gives her precedence for redemption. Without immediate action, Hodaya will be locked up for decades. As her health deteriorates, her family fears for her very life. Click here to become an active member in this urgent case of Pidyon Shvuyim and to bring Hodaya back home while she still has a chance.