But for many of us, there’s that one little dormant space in our heart that gives us a sense of uneasiness.  We each have our own stories. Something we’ve damaged or something we’ve borrowed way back when. Of course, we want to come clean and make good on our mishaps. It’s just that we don’t know whom we even owe.

Sometimes, it can be something more significant. A business deal or other transaction that somehow landed us with money or merchandise that’s not ours – yet we have no way of figuring out whose money it really is.

While this money might not be collectible in a Bais Din here in this world, or perhaps even in court, the Shulchan Aruch clearly stipulates the obligation to pay up lotzeis yedei Shomayim –one’s obligation to the Heavenly court. Moreover, the fact that the money remains in the hands of the muchzak does not by any means make it his. Often there is no way to figure out who the real owner is.

Anyone who drives a car knows the feeling of driving down a tight street or pulling out of a tight parking spot. Did I make that dent or was it there before? Sometimes, we just assume the latter. Other times, we spend hours looking for the owner but to no avail.

How often do we find ourselves short on cash and in need of a quick loan?

What about when we borrow a pen or a cell phone charger? How often do they end up not being returned? How many things do we have lying around our home that we have no idea from whom they were borrowed?

The possibilities are endless. And for many of us, these stories create gnawing feelings in our heart.

How dare we stand before the Ribbono Shel Olam asking for bracha when our hands are sullied by money or assets that are wrongfully in our possession?

Shortly before Aseres Yemei Teshuva, an organization called Neki Kapayim made its initial debut in the United States. Keren Neki Kapayim is a recently devised initiative developed by leading Gedolei Haposkim in Eretz Yisroel. The process involves a five-step method designed to immediately effectuate a complete and permanent return of the possessions of their rightful owner, whoever or wherever they might be.

The return process begins with Keren Neki Kapayim accepting custodial guardianship of the funds. The Keren dayanim then perform a hakna’ah to the true owner of the funds, effectuating an immediate & complete hashavah on the interim, the Keren deposits the funds in a Gemach, accumulating eternal zechusim for the owner by lending out the funds based on the principle of zachin le’adam shelo be’fanav. Before transferring the funds to the Gemach Keren Neki Kapayim formally accepts full responsibility to for the money until the coming of Moshiach, when it will be handed over to their rightful owner. Finally, a full and complete atonement is achieved immediately for the payer, with the money having been effectively returned to the possession of true owner, generating infinite zechusim on his behalf.

Up until now, the dayanim of Keren Neki Kapayim would hold a special Ma’amad Hashava session once a year, on Erev Yom Kippur, where they effectuate the hakna’ah on behalf all depositors.

This year, the new American headquarters was inundated with requests by people from all walks of life seeking to utilize this remarkable solution to an age-old problem. At the Ma’amad Hashavah on Erev Yom Kippur hundreds of thousands of dollars were effectively returned on behalf of the many participants.

Now, in response to many requests, the Keren will be performing a Ma’amad Hashava every Erev Rosh Chodesh throughout the year. There is no longer any reason to have to carry to hold off this critical element of Teshuva until the Yamim Noraim.

The upcoming Ma’amad will take place This Erev Rosh Chodesh, Thursday March 11 allowing participants to enter the month of Shevat, the Rosh Hashana Le’ilanos, free of any unreturned assets in their possession. To take part in this year’s Ma’amad Hashavah, click here or call the Neki Kapayim hotline today at 732. 569.9740. 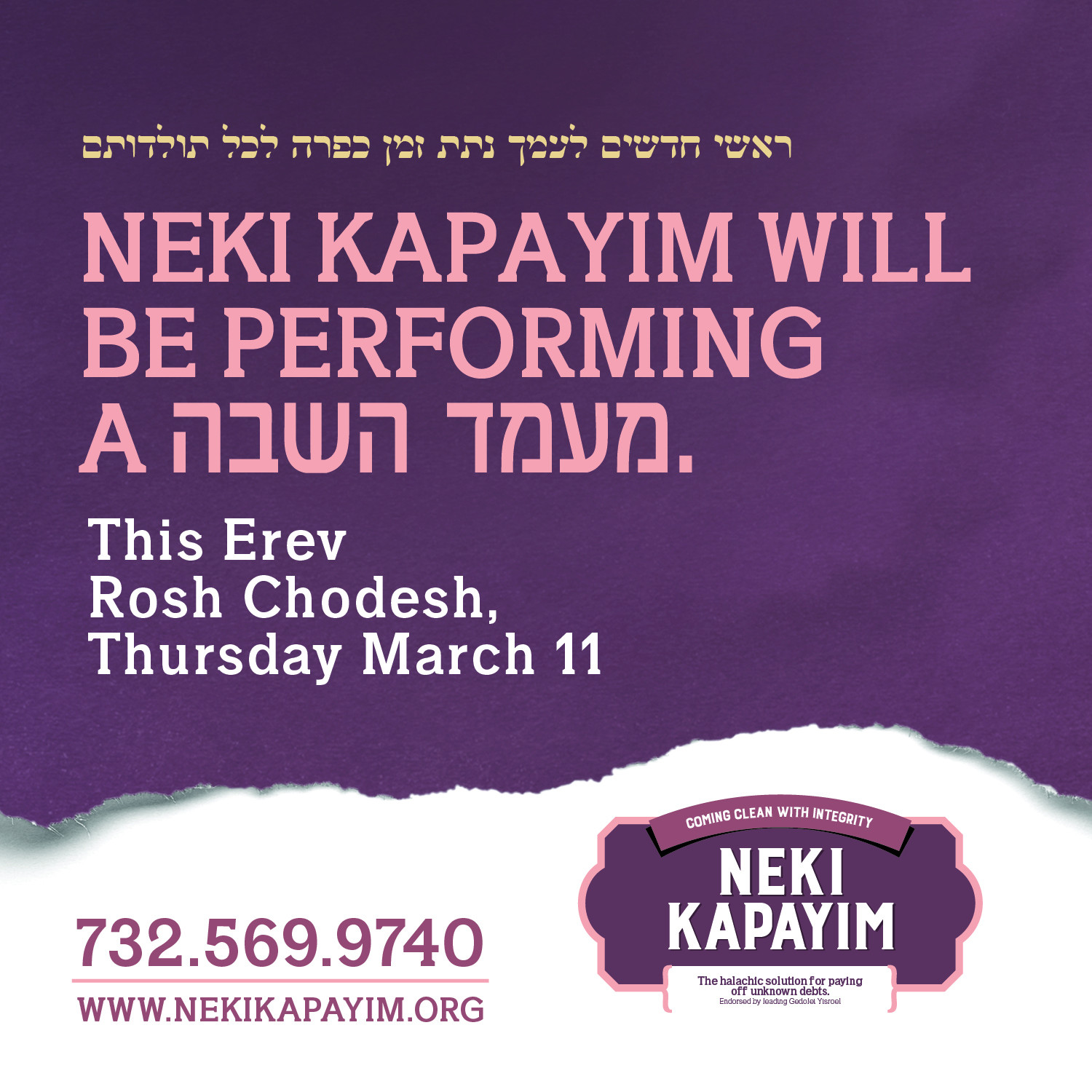