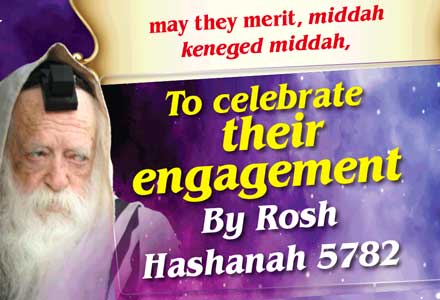 Maran Rabeinu HGR’ Chaim Kanievsky shlit”a: Whoever contributes to Kupat Ha’ir’s campaign for poor brides the sum of 513 shekels [$160] the gematria of “chassan- kallah,”should merit, midah k’neged midah, to find their zivug and get engaged by Rosh HaShana 5782”

TO GET ENGAGED BEFORE ROSH HASHANA 5782 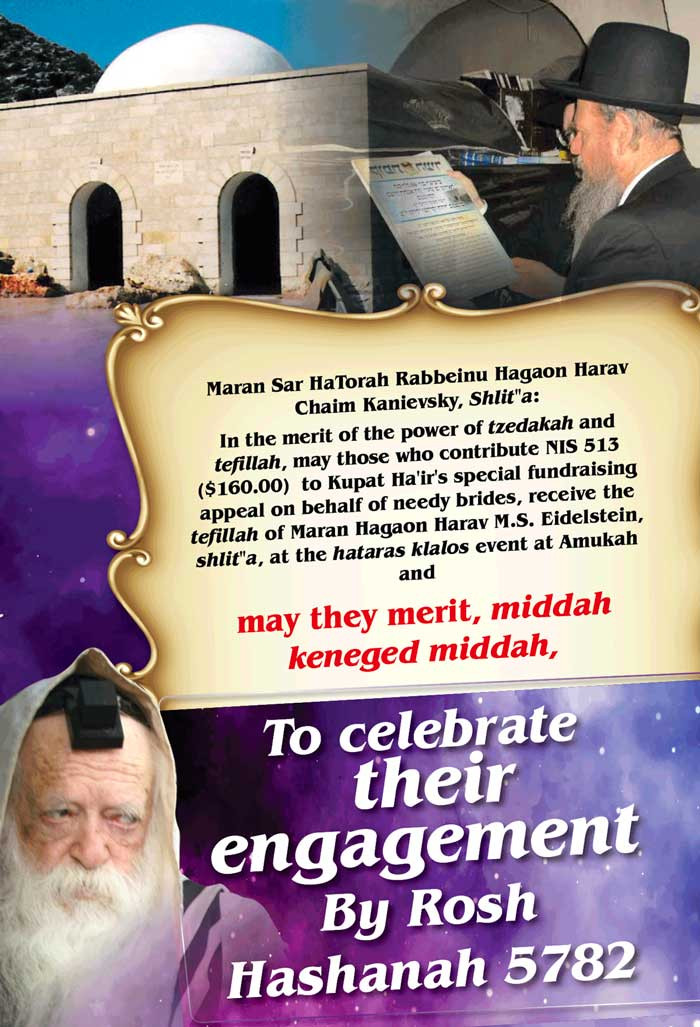 In another few days: The tefillah at Amuka which could bring you your zivug by this upcoming Rosh Hashana

A tefillah like this one doesn’t see every day. At chatzos of the 26th of Sivan the yahrtzeit of the holy Tanna Rabbi Yonasan ben Uziel zy”a, HaGaon HaRav Mordechai Shlomo Edelstein shlit”a will conduct an awe-inspiring  tefillah event on the site to bring down yeshuos for the public. With the bracha of Maran Sar HaTorah HaGaon R’ Chaim Kanievsky shlit”a that those who contribute to poor brides should merit, midah k’neged midah, to find their zivug and get engaged by Rosh HaShana 5782.

Transmit your names>>>
In a short while we greet the great day of the 26th of Sivan , the day the whole world marks as the yahrtzeit of the holy Tanna Rabbi Yonasan ben Uziel zy”a who is interred in Amuka, in northern Israel.

It’s sufficient to merely mention the name ‘Amuka’ to cause multitudes to feel a sense of kedusha: the holy tomb has long been a magnet, and many have had their yeshua at this place that’s auspicious for finding one’s marriage partner. Many have found, by tefillah at this holy site, their true soulmate.

Already for hundreds of years, many have been magnetically drawn to this auspicious site. It’s been a veritable lighthouse of yeshuos, as multitudes have thronged to it and have experienced yeshuos which were above and beyond the natural.

Now, a few days before the yahrtzeit, Kupat ha’ir has publicized that, due to the unprecedented number of poor brides who do not even have the means to pay for their own weddings,

HaGaon HaRav Mordechai Shlomo Edelstein shlit”a will be conducting, at chatzos, the yahrtzeit, an awe-inspiring tefillah event and hataras klalos at this auspicious place, to help people experience their yeshuos.

Those who donate to Kupat Ha’ir’s fundraising campaign for poor brides the sum of at least 513 shekels [$160] – the gematria of chasan kallah- will be included in the tefillah of HaGaon HaRav Mordechai Shlomo Edelstein shlit”a in the hataras klalos ceremony at Amuka, which will be conducted according to the tradition he received from his father HaGaon HaRav Ya’akov Edelstein zt”l. Also they should merit, with the power of the tzedakah and the tefillah, that, middah k’neged middah, they should become engaged by Rosh Hashana 5782.”