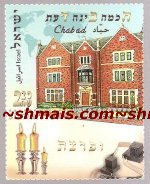 SNS has learned that in the coming weeks IYH the Israeli Postal Authority will be issuing a stamp that will no doubt be a Kovod to Chabad-Lubavitch. The stamp has a drawing of 770 and the words Chochma, Bina, Daas printed on it. In addition there are images of Tefillin and Shabbos candles.
This stamp celebrates the major impact the Rebbe and Chabad have had in Israel and their social and religious contributions to Judaism globally.
Interestingly enough, a few years ago the Israel Postal Authority prepared a stamp with a drawing of the Rebbe but that one was never actually issued.
Mr. Sam Malamud, whose firm represents the Israeli Postal Authority in the United States and Europe, expects an immediate sellout of the ?770? stamp. Given the global admiration of the Rebbe and Chabad, this may possibly be the most sought after Israeli stamp ever issued.
The stamp carries a denomination of 2.20 NIS and is valid for use within Israel or can be used to send mail from Israel, worldwide.
According to our source, once released, the stamp will be available at The Shluchim Office.