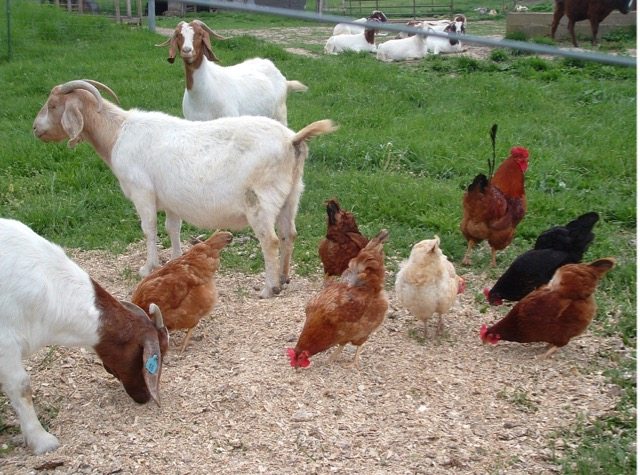 Goats and chickens are two animals that get along.  Farmers, often allow them to graze together and share a lot of space.  But on or around Yom Kippur, they both play a role of a “scapegoat” of sorts. The goats play a central, yet little understood, role in the avodah of Yom Kippur (no longer performed, but part of the Tefilos).  The chicken plays a role in the Ashkenazic practice of Kapparos immediately before Yom Kippur– also a little understood ritual.

What is behind these diverse practices?

The two male goats -se’irim of Yom Kippur are identical in numerous ways. The Mishna in Yuma (6:1) has them similar in appearance, height and value.  They are both purchased and presented together.  Lots are chosen at random.

The first goat is offered as a “chatas” – a national sin-offering. The second goat has a different destiny.  The Kohen Gadol performs a “vidui” (confession) of all of the sins of Klal Yisroel.  It is then escorted out some nine miles into the desert by a designated individual who pushes it off a cliff of the mountain of Azazel.  It falls to its death.

In explaining this ritual, the Ramban cites a Midrash in Bereishis Rabbah (65:10) that the goat thrown off the cliff is to nullify the angelic representative of Aisav or Edom – who would normally act as a prosecutor against Klal Yisroel. The Ramban further cites a Pirkei D’Rabi Eliezer (chapter 46) that has this angelic representative acting as a defense lawyer before Hashem.

The Rambam in his Moreh Nevuchim (3:66) offers a different explanation. The function of the “scapegoat” (appropriately named) is presented as follows:

“The goat that was sent into the wilderness served as an atonement for all serious sins more than any other chatas that is brought. As it thus seemed to carry off all sins, it was not accepted as an ordinary sacrifice to be slaughtered, burnt, or even brought near the Sanctuary; it was removed as far as possible, and sent forth into a waste, uncultivated, uninhabited land.. There is no doubt that sins cannot be carried like a burden, and taken off the shoulder of one being to be laid on that of another being.

Rather, these ceremonies are of a symbolic character, and serve to impress men with a certain idea, and to induce them to repent; as if to say, we have freed ourselves of our previous deeds, have cast them behind our backs, and removed them as far as possible from us.”

What follows is a third explanation  – first presented by Rav Tuvia Ben Avrohom HaLevi a 16th century student of the Arizal’s son in law, Rav Shlomo Sagis.  He also lived in Tzfas and his explanation can be found in the sefer Chain Tov on Vayikrah first published in Venice in shin samech hay.  The explanation was further elaborated upon in a Sefer called “M’ain Refoel” – published in Yerushalayim some fifty years ago.  There are many parallels between the Yom Kippur Avodah and Mechiras Yoseph: the goats, “the ish iti,” the dipping of the blood, etc.

Essentially, the entire procedure is a means of achieving atonement for the sin of mechiras Yoseph.  This sin – is paradigmatic of an overarching problem that prevents the geulah – the redemption – sinas chinam.

The Avodah of Yom Kippur prescribes chesed, acts of kindness, as the remedy for this sin – a sin which is representative of sinas chinam.  The Mishnah in Yuma (6:4), states that the most choshuv residents of Yerushalayim would accompany the “ish iti” the designated person who would bring the seir l’azazel to the first of the ten booths each 2,000 amos apart.  The ten stations afforded the designated person with rest stations.  He could rest, obtain food and water if necessary to endure this very difficult trip.  Food and water in this context is pikuach nefesh.

I would like to suggest that the Kaparos performed before Yom Kippur may very well have had the very same theme, but somehow – in the application of these themes – some of the providers of that opportunity may have possibly lost their way.

Kapparos also has the symbolic theme mentioned in Moreh Nevuchim but it contains two other elements:

Chessed, and the love of it, forms the very blueprint of the world and these two rituals can help bring that idea out.  What follows then is an appreciation of one of these three pillars that hold up the world.

Performing Chessed gives our life meaning.  Since Chessed plays such a crucial role in life, it is important to understand what Chazal tell us about this most important subject.

What is the source for the Mitzvah of performing Chessed?  The Gemorah (Bava Kamma 100a) identifies a posuk in Shmos (18:20) as the source, “And inform them of the path that they should walk..” The Rambam in Sefer HaMitzvos (Shoresh 2) cites this as a biblical requirement.  There is another Pasuk which one fulfill when performing Chessed, “V’ahavta l’rayacha kamocha. – Love thy neighbor as yourself.”  The Rambam in Hilchos Aveilus (14:1) cites this as a biblical fulfillment, although the Rabbis provided illustrations as to how to fulfill it.

WALKING IN HIS WAYS

The major obligation of Chessed stems from walking in Hashem’s ways.  The Gemorah (Sotah 14a) discusses the pasuk which says, “Acharei Hashem Elokecha taylechu – you shall walk after Hashem your G-d (Dvarim 13:5).”  The Gemorah poses a question.  It asks, “How is it possible to physically walk after the Divine Presence?”

The Gemorah answers that it means to follow after the Chessed traits, kavyachol, of Hashem. Just as He provides for the unclothed, so too must you provide clothing to them.  The Sefer Mitzvos Gedolos states that this verse is part of the related Pasuk of “v’halachta b’drachav – and you shall walk in his ways.”  In other words, the verse of Acharei Hashem Elokecha Taylechu is referencing the verse of v’halachta b’drachav.  It could very well be that the aforementioned verse in Shmos (18:20) is also referencing this.

UNDERSTANDING THAT CHESSED CONNECTS US TO HASHEM

Rav Yitzchok Isaac Sherr zatzal explains (Leket Sichos Mussar p.76) that the pasuk of “Zeh Kaili v’Anveihu” teaches us the obligation of feeling and understanding that the performance of Chessed brings us closer to Hashem.  This is on account of the Gemorah’s understanding of the word “Anvehu” to mean “Ani v’hu – I and Him.”  The meaning of this Pasuk is therefore, “This is my G-d, and I shall bind myself to Him. I know that I can accomplish this binding through the notion of performing acts of Chessed.”  The consequences of this Pasuk are an obligation of thought, not practice. It is something that we must think – Chessed binds us to Hashem – Ani VeHu.

One means of achieving this is the further obligation that the sages placed on people to say (Tana D’Bei Eliyahu chapter 25), “When will my actions reach the level of those of our forefathers?” The forefathers personified these principles of Chessed and wholesomeness.  They also are the paradigns of relationship with Hashem.

The Avos were so close to Hashem that they established the Tefilos.  Chessed can bring us to such a high Madreigah, spiritual level, that it can bring us to the level of the Avos!  And a person is obligated to view Chessed as the means of bringing us closer to Hashem and constantly ask, when will my actions of chessed bring me up to that level of spirituality?

The posuk in Micha (6:8) states, “..What does Hashem require of you? Merely to do justice and love Chessed..”  The idea is that we must foster and develop a love of Chessed.  Rav Sherr explains that there are three elements to this love:

1] To love doing acts of Chessed ourselves.

2] To love and appreciate a situation where Chessed is being performed by others – either for another or for others.

3] To love the existence of opportunities for Chessed in the world.

The Chofetz Chaim writes (Ahavas Chessed 2:1) that not only must one love Chessed but one must stick to this character trait and always go beyond the measure of what is required.  He give the analogy of a parent.  A loving parent gives more food and clothing than the child requires, so too must we do likewise in sticking to the Midah of Chessed.

Everyone in the world needs Chessed.  When we are born as babies we require the chessed of others.  When we become elderly and sick, we also need the Chessed of others.  There is no other way.  Chessed is necessary for the world to be built.  Hashem built this into the nature of the world in order to show us the very necessity of Chessed.

There is another element in Chessed too.  It is a natural tendency for people to become miserable and crabby as we age.  Living a life committed to Chessed changes that – it stops us from declining in this respect.  Thus, Chessed not only builds the world – it builds ourselves as well.

So let’s use the symbolism behind these two rituals as a means to further develop ourselves and our connection to Hashem. Let’s walk in his ways, let’s realize that chessed connects us to Hashem, and let’s also realize that it is our obligation to love our opportunities for chessed.  Recently, the entire five towns community had the opportunity to see the beauty of chessed in this community.  Ten schools came out to assist in a chessed that the entire community witnessed.  The achdus of the community was palpable.  What a zchus with which to enter the Yomim Noraim!  Mi ka’amcha Yisroel!