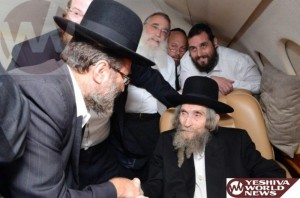 Maran Hagon HaRav Aaron Leib Shteinman Shlita has left Eretz Yisrael for his chizuk mission in France. The Gadol haDor’s departure was delayed about a half hour, apparently the Rosh Yeshiva was feeling weak.

As was reported earlier by YWN-ISRAEL, tens of thousands of Yidden will be traveling to Paris to take part in the event which will last for a few hours, after which the gadol hador will return to Eretz Yisrael.