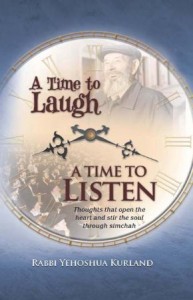 Excerpted from A Time to Laugh, A Time to Listen by Rabbi Yehoshua Kurland, a novel collection of over forty original and inspirational articles, which explores various topics in hashkafah, in a passionate, yet witty style. In the spirit of the classic Talmudic “milsa d’bidechusa”, humor is used to introduce and enhance the discussion of topics close to the heart of every Jewish person.

Abe and Murray, two elderly Jewish men, are strolling down the street one day when they happened to pass a church. Outside on the lawn, a large sign is posted that reads: “Convert and Receive $100 – FREE!”

Abe stops for a moment and stares at the sign.

“Yeah! I’m serious!” Abe replies. “I sure could use a hundred dollars! I’m going in!” With that, Abe strides purposefully into the church. He exits twenty minutes later with his head bowed.

“So!” says Murray. “Did you get the hundred dollars?”

Abe looks up at him and says, “Is that all you people ever think about?”

Generally, a person does not transform from one level of observance to the opposite extreme so swiftly. Such a rapid metamorphosis goes against the laws of nature of the evil inclination. The power of the yetzer hara is to work little by little. “So is the craft of the yetzer hara: Today, he tells him [the person], ‘Do this.’ Tomorrow, he tells him, ‘Do that.’ – Until he tells him, ‘Go serve idolatry.’(Shabbos 105)” A little bit today. A bit more tomorrow. Although initially the yetzer hara’s ultimate goal may be extremely far away, a fast transfiguration seems beyond its strength.

Yet, at times we find that individuals, or even Klal Yisrael as a whole, descended from the highest level of observance to heresy and apostasy in record time. A case in point is the sin of the Golden Calf. That a generation that was witness to the splitting of the sea and all the miracles in Mitzrayim; that a Dor De’ah, standing at Har Sinai and pointing with their finger at the revelation of the Shechinah while saying, “Zeh Keili v’anveihu – This is my G-d and I will glorify Him,” could suddenly worship a molten image cast from gold, is an enigma that requires explanation. This is especially true when one considers the limited ability of the yetzer hara to achieve such a dramatic reversal. The pasuk itself underscores this very point when it writes: “They turned away so quickly from the path that I commanded them and made for themselves a golden calf.” How could it have happened so quickly?

It wasn’t so simple. Klal Yisrael was tricked by the Satan. On that fateful day, he showed them a mirage: the image of the coffin of Moshe, their great leader. The sky blackened; darkness enveloped them. A climate of gloom and doom, disappointment and despondency surrounded them. Their leader gone, an overwhelming fear overcame them.

With a nation gripped by panic and despair in his hands, the stage was set for the Satan to go in for the kill. No longer limited by his typical power of small incremental gains, but rather empowered exponentially by virtue of Klal Yisrael’s depression, he was prepared for a windfall profit. Such is the strength of the Satan when we are down, explains Rav Chaim Shmulevitz zt”l in his classic sefer, Sichos Mussar. Even a Dor De’ah can be transformed into a nation of idol-worshipers.

It had been Kayin – not Hevel – who had conceived the idea to bring a sacrifice to Hashem (see Ramban). The notorious Kayin was actually the first to comprehend the secret of sacrificial offerings. He clearly was an oved Hashem. Yet, when Hashem did not respond to his more frugal offering, as He did to his brother Hevel’s more generous one, Kayin lapsed into a fit of anger and envy that led to his infamous act of murder. Targum Yonasan adds a new dimension: In a moment’s time, Kayin went from being an oved Hashem to a kofer b’ikar (heretic). In his rage and fury at Hashem’s rejection of his sacrifice, he denied the fundamental concepts of reward and punishment and of the World to Come, and declared blasphemously: “Leis din v’leis dayan – There is no judgment and no Judge!”

Again we ask: how could he have fallen so swiftly? Such power is not the domain of the yetzer hara! However, when one has “lost it,” when he is filled with despair, when he is consumed by such all-controlling, bad character traits as anger and jealousy, his yetzer is empowered and anything is possible r”l.

We live in a world that is shaky and forever changing. The daily news is shocking and horrifying. The ups and downs of life threaten our security, and it is easy to slip into frustration and despondency. As Jews, we must be cognizant that to do so would increase the power of the Satan to destroy us. It is difficult enough to deal with the unrelenting attack of the yetzer hara in its normal, slow, and deliberate fashion. We dare not expedite the process and facilitate the yetzer hara’s power by allowing ourselves to fall into lapses of anger and depression!

Let us resolve to serve Hashem with simchah and remove this menace, little by little, through our meticulous mitzvah observance. Let us be determined to never lend added strength to the enemy.