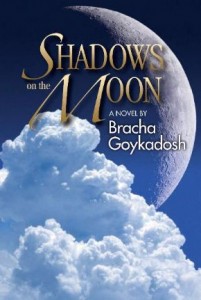 Choosing books that are both appropriate and entertaining for young adults can be a delicate task. Literature that is designed with important lessons, and is mindful of standards among a most exacting readership, can often turn out to have flat characters and plotlines so sanitized that they are bland and unrealistic. Yet the unfortunately-commonplace, opposite situation, where the book is very “real” and exciting, but doesn’t necessarily contain meaningful lessons for its readers, is certainly not an option, either. In response to this contemporary conundrum, a crop of emerging frum authors has begun making strides in this area—creating books that are as gripping as they are wholesome.

Bracha Goykadosh is one such author. In her novel Shadows on the Moon, she has created a cast of characters so realistic and relatable, you will feel like you’ve met them all in person; more, like they are your friends, your neighbors, your family members. Shadows on the Moon is the story of Ella, a high school girl who struggles to fit in with her changing family and her social circle, while keeping up in school and pursuing her hobby of writing and acting in plays. The book, while both entertaining and edifying, is unusually realistic; the girls’ habits, hobbies, and concerns are those of a twenty-first-century Bais Yaakov girl, and the plot fits seamlessly into that milieu.

Ella has always been considered a bit of a misfit, especially by the standards of her “perfect” twin sister, Tova. Though they were only small children when their mother died, Tova has long ago managed to put the grief behind her, while Ella remains shackled in her bitter feelings, steeped in misery even while against her will. Her father’s recent remarriage only makes things worse for her, as a seemingly self-centered stepmother marches into her life, along with two little girls of her own—stepsisters who, Ella is convinced, are determined to make her life even more miserable than it already is.

Why doesn’t anyone understand her? Why don’t they realize that it is not the “chessed case” kindness that she craves, but rather only some plain-and-simple, genuine acceptance and understanding?

Then comes an awful discovery at her school Shabbaton—Ella’s first lightning bolt, her first encounter with the under-the-mask world. And, as Ella soon realizes, once a person has stepped into this under-the-mask world, it is impossible to ever pull the mask back down on it…

With her eyes opened a bit wider after the Shabbaton encounter, Ella begins to see things very differently. In this new light, she is shown again and again that things are usually not as they seem. Ella perceives that very often reality is obscured, either because it is she who doesn’t want to see it, or because many times, people—even the seemingly happy-go-lucky and “shallow” ones—have other dimensions to them which they’re keeping inside…

Books that are written with a big black-and-white moral in mind tend to be unrealistic, squashed and molded throughout by the impending denouement. In contrast to this, Shadows on the Moon realistically portrays its characters and their struggles in a most engaging way, while still leaving us with important life lessons, one of which is that reality can be unclear. Through the course of the story, Ella learns about life, herself, and her classmates, and because her narration is so true-to-life, readers will relate to her conflicts, appreciate her triumphs, and learn along with her. Shadows on the Moon is an important read in its own right; hopefully it is also a harbinger of similar books to come.

Click HERE to purchase the book from israel Book Shop.