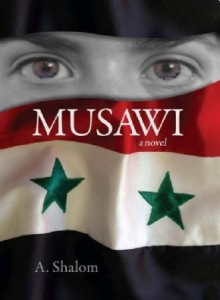 Dusty, hot and antiquated, Haret-al-Yahud, the Jewish Quarter of Damascus, Syria, has been a haven for Jews since their expulsion from Spain in 1492. But in the aftermath of the Yom Kippur War, the community’s days are numbered. This is the city in which Sophia Zalta, the heroine of the novel Musawi, by A. Shalom, grows up.

The Jews of Damascus are restricted from travel, from work, even from owning telephones. They work hard to make ends meet, to keep a low profile, and they avoid giving any hint of allegiance toward Israel.

But behind closed doors, they hope. They hope for things in Syria to improve, they hope to survive to celebrate weddings and births. For a while, some dare to hope to move to Eretz Yisrael.

As the noose of the Mukhabarat, the Syrian Secret Police, tightens, the hope of aliyah grows fainter and fainter. Years ago, some people escaped to Israel, but since then, the path out of Syria has grown more dangerous. Nobody knows who knows the legendary safe route out to Lebanon, or if it is even safe anymore. Nobody knows who within the Jewish Quarter has been supplying information to the Secret Police. It is more pressing to stay safe against the threat of local thugs than it is to dream impossible dreams.

Sophia Zalta struggles with this way of life. She wants to grow up, to get married and please her parents the way her sister did, but married women cannot climb trees, cannot help Grandpa brew araq and sell it from a wagon. Most importantly, married women cannot risk leaving Syria, even if the safe route were discovered.

But can Sophia hold out forever? Can she put off marriage for a dream that grows unlikelier each day? Is she lucky that she can settle for a husband who will support her respectably, or should she hold out for one who will understand and nurture her hopes and dreams? Can she risk her own life to escape without endangering the family she is prepared to leave behind?

The novel Musawi, named for an Arabic epithet used to describe followers of Moshe Rabbeinu, brings the Jewish Quarter of the 1970s to life in gritty, colorful detail. Mrs. Shalom is intimately familiar with the customs of the Syrian community. She must have done a lot of research on the geography and social life in Jewish Damascus, to be able to recreate it in such compelling detail.

For people interested in an entertaining novel, Musawi is compelling. Readers will love Sophia Zalta for her bravery, compassion and idealism. From Sophia’s escape from gun-toting Arabs in the souk to her adventures in search of a husband, Musawi is gripping to the last page. For people interested in history, Musawi portrays a glimpse of Sefardic heritage, a picture that is even more fascinating when we realize how recently the story is set.

Musawi is a breath of fresh air amongst contemporary novels in that it is different, it is an authentic portrayal of the type of real-life experiences people went through, and it can be read and enjoyed by young and old alike.