Avreich Rav Shlomo Zalman Eliyahu Brill z”l was niftar Tuesday morning 18 Adar I 5774 from a difficult illness, at the age of 38. The news spread quickly in the close knit Sanzer community in Netanya.

The niftar was a son to R’ Eliezer Brill, a well known member of the Kiryas Sanz kehilla.

After his chasenah the niftar moved to Rehovot for a short period of time and later returned to Kiryas Sanz. He was known for his dedication to his Torah studies however when it became known that Laniado was experiencing fiscal difficulties, he began fundraising, bringing in millions of dollars towards keeping the hospital afloat. 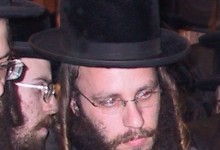 The niftar is survived by his rebitzen and eight children, the oldest being 16 and the youngest 2. The levaya began at the main Sanz beis medrash at 12:30. Kvura was in the old Netanya Beis Hachaim. יהי זכרו ברוך.