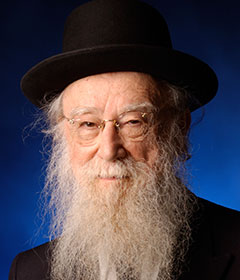 YWN regrets to inform you of the Petira of HaRav Yosef Weiss ZATZAL, who served as a Rosh Yeshiva at RIETS [Yeshiva University] for more than 60 years. He was 95-years-old.

HaRav Weiss led the Semicha program at YU for decades, and was a leading Posek for the Jews in the Upper West Side of Manhattan.

The Levaya was held in Shomrei Hadas Chapels on SUnday afternoon