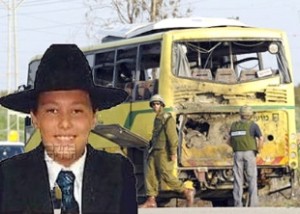 Daniel Viflic, (Raphael Daniel Aryeh ben Tamar) the 16-year-old boy injured in the anti-tank missile attack on a school bus in the Negev on last week, was unfortunately just Niftar.

He had been hospitalized in Beersheba’s Soroka Medical Center since the terror attack, and his condition slowly deteriorated until his Petira just a few minutes ago.

Viflic suffered severe head trauma and was artificially respirated while unconscious after an anti-tank missile fired from the Gaza Strip struck his school bus in the Negev two weeks ago.

The missile, which was fired by Hamas terrorists, hit the bus moments after most of the children got off, while it was driving near Kibbutz Saad, about 2.5 k.m. from Gaza. Only two people were on the bus when it was hit – the driver, who was lightly injured in the leg, and Viflic, who was en route to visit his grandmother. The bus driver is a friend of the family.