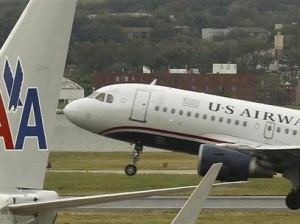 US Airways Group Inc and AMR Corp are nearing an $11 billion merger that would create the world’s largest airline and could announce a deal within a week, after resolving key differences on valuation and management structure, people familiar with the matter said.

Under terms of a deal that are still being finalized, US Airways Chief Executive Doug Parker would become CEO, while AMR’s Tom Horton would serve as non-executive chairman of the board until spring of 2014, when the combined company holds its first annual meeting, the sources said.

The deal would come more than 14 months after the parent of American Airlines filed for bankruptcy in November 2011, and would mark the last combination of legacy U.S. carriers, following the Delta-Northwest and United-Continental mergers.

The all-stock merger is expected to value the combined carrier at between $10.5 billion and $11 billion, and would give AMR creditors 72 percent of the ownership in the new company and US Airways shareholders the rest, they said.

The board of each airline is expected to meet in the middle of the coming week to vote on the proposed deal, and an announcement would likely come in the latter part of the week, the sources said, asking not to be named because the matter is not public.

Negotiations are continuing and could still be delayed or fall apart, they cautioned.

The companies had initially tried to schedule board meetings for Monday, the day that AMR’s creditors committee planned to convene, and had aimed to announce a deal as soon as Tuesday, sources told Reuters previously.

But AMR needed more time to finalize details and the boards of the two airlines are now not expected to gather until around Wednesday, the sources said.

The AMR creditors committee is still meeting on Monday in New York, as initially scheduled, and will continue discussions as the airlines finalize negotiations, they added.

A combination with US Airways would create the world’s top airline by passenger traffic and help the two carriers better compete with rivals United Continental Holdings and Delta Air Lines Inc.

A near-$11 billion valuation of the combined American-US Airways compares to some $12.4 billion market capitalization for Delta, and $8.7 billion for United Continental.

US Airways will follow through on its agreement with AMR labor unions last year that the combined carrier would be branded American Airlines and be based in Fort Worth, Texas, where AMR is currently based, sources said. US Airways has its headquarters in Tempe, Arizona.

As part of the merger, US Airways will also leave the Star Alliance to join the oneworld global airline alliance, of which American Airlines is an anchor member along with British Airways, the people familiar with the matter said.

The airlines are estimating that a merger will bring about $1 billion in revenue and cost benefits, they said.

Horton rebuffed an aggressive takeover push from US Airways early in the bankruptcy process, saying the airline preferred to exit court protection on its own and consider a deal later. But after several months of talks with its own creditors as well as with US Airways, Horton has softened his approach and agreed to consider all options.

A combined American-US Airways would provide the scale to match bigger rivals that are upgrading service and expanding international routes. The merged company would have revenue of $38.69 billion based on 2012 figures, ahead of United Continental which had revenue of $37.15 billion last year.

The new American would have a solid presence on the important U.S. East and West coasts and on North Atlantic routes, given American’s revenue-sharing joint venture with British Airways and Iberia.