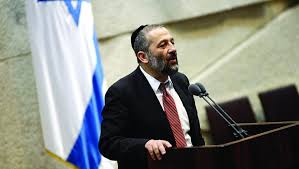 There can be no question that the appointment of HaGaon HaRav Shalom Cohen as the official head of the Shas Council of Torah Sages is another Deri blunder, one that will most likely contribute to the downfall of the party in the next Knesset elections. While no one questions the gadlus of Rav Cohen chas v’sholom, he remains the wrong man for the job.

Aryeh Deri, the wonder boy who according to many is credited with building the Shas party and its affiliated institutions has lost his magic touch. His return to politics after a criminal conviction and jail term following a hiatus of over a decade signals the former Sephardi superstar remains out of touch and functioning with tunnel vision that does not permit him to acclimate to new realities. Shas has shifted to the political right during his absence, and Eli Yishai earned a measure of popularity. His hawkish views have become synonymous with Shas, and Deri’s dovish outlook and affinity for the political left is problematic to many Shas voters.

Deri is too concerned with maintaining his leadership role, constantly on guard to fend of coup attempts from supporters of Eli Yishai. His status was complicated by the petira of Maran HaGaon HaRav Ovadia Yosef ZT”L, compelling him to appoint allies to key positions – seeking to build a defensive mechanism around his leadership. Without Rav Ovadia’s absolute word to support his position, he remains vulnerable to critics.

There can be no doubt that during his decades of rule the late Rav Ovadia ZT”L united Sephardic Jewry. The late posek championed the call to return his followers to their glorious past and to renew lost traditions and instill a pride that was lost in many traditional homes. The natural leader should have been HaGaon HaRav Moshe Shlomo Amar Shlita, regarding whom Rav Ovadia stated on numerous occasions is the natural successor for Rav Amar earned his Torah through mesirus nefesh. Rav Amar speaks to the masses as did Rav Ovadia, but for Deri, loyalty supersedes leadership suitability concerns.

For Deri it is not about continuing tradition, but it is about remaining in power. He tapped the Yeshiva Porat Yosef rosh yeshiva to replace Maran for he knows Rav Cohen is an ardent supporter of his return to the party. Rav Amar on the other hand is viewed by Deri as an adversary. He told Army Radio’s Razi Barkai this week that Rav Amar was never a leader of Sephardi Jewry or in line to head the party’s Torah Council. Deri worked hard over yomtov to distance Rav Amar from a number of high-level events, including one attended by President Shimon Peres.

Clearly Deri blew it for Rav Cohen will not attract the grassroots Shas supporters, the traditional Sephardim who are unwilling to throw away their Zionism for the new Sephardi chareidi lifestyle which is synonymous with Rav Cohen. He alienates the Sephardim who serve in the IDF, the very same Sephardim that will have barbeques on Independence Day and fly the national flag from their homes and vehicles — the core Shas voters. Rabbi Cohen does not speak to them, rather his harsh comments prior to the last election has burned many bridges with many voters who also align with the dati leumi community.

Simply stated, Deri’s decision may yield short term benefit but the error of his ways will become painfully evident in the next election, even more so if Eli Yishai breaks away to launch a new party, which many feel will be the case.