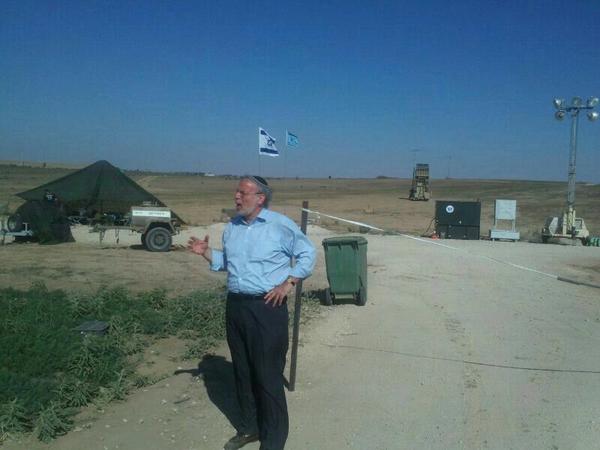 Since Tuesday, I have been staying in Be’er Sheva where this morning we ran with everyone else to a bomb shelter as the warning sirens interrupted our breakfast. After ten minutes, we were told that it was safe to emerge and did so, grateful once again.

In nearby Ashdod and Ashkelon, the people have been bombed non-stop for weeks. That there have been so few casualties here after more than 1,200 rocket attacks is nothing less than miraculous. We should recognize and appreciate the protection that G-d has granted us.

As a visitor, so to speak, I am cognizant of the fact that this is only an experience for me. G-d willing, I am back in New York next week. But those who live here and are forced to endure these potentially deadly and devastatingly destructive attacks on their communities every day must experience the sirens quite differently. For these people, who simply want to raise their children and live their lives in peace, the routine has become a nightmare of constant uncertainty, of sprints to bomb shelters, or fear for one’s children.

We drove through the most beautiful areas of Ashdod this afternoon. The parks here are magnificent. But they were empty. A picture-perfect day with beautiful weather and all the children home from school for the summer, but trapped inside their homes because mothers are frightened and want their children as close as possible to shelter. And who can blame them?

I have met people who are afraid to go outside to get milk; a woman whose husband has been hospitalized but she is afraid to leave her home to visit him. Life goes on here—people go to work—but it’s hard.

Today, in Ashkelon, we visited a boy in the hospital who was almost killed in a bomb attack. He was grateful for the visit. And then I was shown a gas station where recently a bomb fell. There, I was introduced to an Israeli man who drives an oil tanker. He had heard the alarm before the bomb and had the wherewithal to turn off the valve and cap the station’s supply line just before the bomb hit. How many lives had this man saved? Hundreds? I was so emotional meeting him that I scarcely knew what to say.

In Ashdod, I held the shells of Qassam and Grad rockets—the indiscriminate missiles sent from terrorists in Gaza toward high-population centers. These rockets are meant to kill dozens of people at a time, depending on where they hit.

Tolerable? No nation would stand for what Israel has already tolerated. Restraint? No nation has demonstrated more. But this cannot continue. Americans are not getting the full picture. One must be here to feel the effect, to see the conditions that innocent people are living under. Yes, Israelis have not been slaughtered by the hundreds the way Hamas has intended; cities have not gone up in flames as they have vowed, but the Israeli people are devastated.

Last night we davened (prayed) at Netivot where I met a man in his 40s—a religious, Sephardic man who was hurrying in a store. He explained that he had just received notice to report to the army in three hours so he was rushing to get supplies. There’s no time to pack or bake bread. What does a man in his 40s do in the army? He said he deals with the bodies. He deals with the dead.