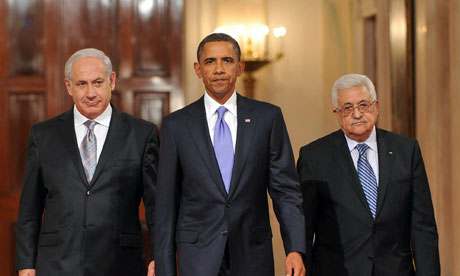 During a speech to the World Zionist Conference on Tuesday, Benjamin Netanyahu said that Hitler intended only to expel the Jews from Europe, and that the idea to exterminate them had come from Haj Amin al-Husseini, a Palestinian Muslim elder, who served as the Mufti of Jerusalem.

A day later he clarified, “Hitler was responsible for the Holocaust, I think no one should deny … important testimony about the Mufti of Jerusalem, that he told the Nazis to prevent the fleeing of Jews from Europe, and that he supported the Final Solution.”

This relatively harmless observation of history apparently has caused a global outcry from everyone starting with PLO Secretary General Saeb Erekat, U.N. Secretary-General Ban Ki-moon and other world leaders. White House press secretary Josh Earnest told reporters that the Obama administration has no doubt who was responsible for the genocide, which involved the systematic murder of six million Jews. These comments, which implicated the former grand Mufti of Jerusalem in the decision to proceed with the Holocaust, amount to inflammatory rhetoric stroking tensions on the ground between Israel and the Palestinians. “The inflammatory rhetoric needs to stop,” Earnest said.

CNN, BBC, Reuters have been all over this story in news reports that read more like Op-eds. His words are described as “shocking”, that “global outrage growing” and from the DailyBeast, my favorite, “Bibi Absolves Hitler for Holocaust”.

The point Netanyahu was obviously making is that Islamic hatred against the Jews predated the State of Israel and certainly predates any talk of an “occupation”. That the Mufti of Jerusalem at the time was a horrible anti Semite, is not a debate. The question is if he was merely cheerleading the holocaust or actually encouraging Hitler’s actions. I personally don’t see the point in Mr. Netanyahu wading into this historical debate, and his words indeed may have been poorly chosen. That being said, this supposed outrage is clearly fake and just an excuse to be “outraged” at Mr. Netanyahu and Israel. They are pretending to be insulted by the cheapening of the memory of the holocaust. In truth however, his words are not “inflammatory rhetoric” that will stroke tensions between Israelis and Palestinians for obvious reasons.

Clearly, there is no issue of incitement on the Israeli side because the Israelis (with ultra-rare unfortunate exceptions) have not been committing acts of terror against the Palestinians. At least 99.9% of Israelis are against randomly attacking Palestinians even when they are being randomly targeted themselves. Nobody with any grip of reality can honestly interpret PM Netanyahu’s words as a nod to violence. The majority of Israeli Arabs, even more so Palestinians in the West Bank however, do support these terror attacks.

Let’s take a look at some recent statements made by Palestinian president Mahmoud Abbas that did not seem to irk anyone.

“Al-Aqsa is ours and so is the Church of the Holy Sepulchre. They have no right to desecrate them with their filthy feet.”

“We welcome every drop of blood spilled in Jerusalem. This is pure blood, clean blood, blood on its way to Allah. With the help of Allah, every martyr will be in heaven, and every wounded will get his reward.”

After the murder of the Henkin parents, PLO official Mahmoud Ismail, went on official Palestinian television, PBC, and proclaimed the couples murder to be a fulfillment of “Palestinian national duty”. Such statements encourage the next generation of terrorists to continue with their unending murder. The results have been felt in Afula, Ber Sheba, Hebron, and Jerusalem and throughout the country

Apparently, the PA president openly encouraging Arabs to kill Jews, which is then acted upon on a daily basis, is lumped together with a non-relevant historical statement from the Israeli PM and both viewed as equal inflammatory rhetoric that’s causing “violence”. The Anti-Israel crowd, including the WH and POTUS, seem to be going to extreme length to extract from the PM words that can be interpreted as “inflammatory rhetoric” and then equate it with the real incitement coming from the Palestinian side that causes real violence.

The Obama admin is certainly not outraged at the PM statements regarding the holocaust, it’s the other way around. They dislike the PM and are using his words to try to justify their dislike. This selective outrage is part of a pattern that shows Obamas dislike of Israel and his personal hatred of Bibi that colors his judgement on all matters related to Israel.