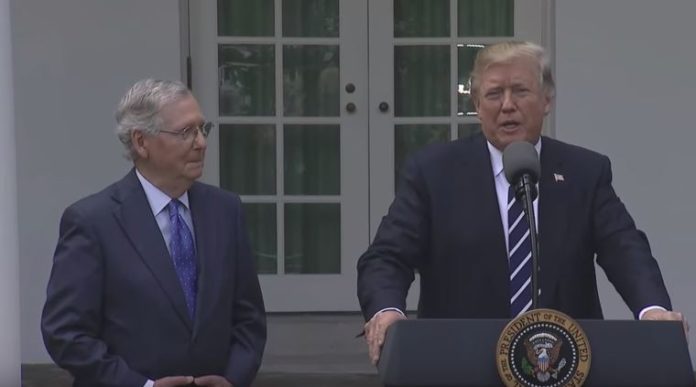 Donald Trump and Mitch McConnell have reaffirmed their alliance of necessity in a raucous Rose Garden news conference that also underscored their sharp differences. The garrulous president claimed they were longtime friends, now closer than ever; the reserved Senate Republican leader allowed that they share goals and speak often.

It was a spectacle that mesmerized Washington, as Trump and McConnell appeared side by side for more than a half-hour, the president tossing off answers — sometimes mini-speeches — on all topics while McConnell, disciplined as always, delivered brief, scholarly explanations about the legislative process and the risks to their party of nominating candidates who can’t win.

At various points, the president denounced the Russia-Trump campaign investigation, lauded himself for his record on judicial nominations, argued wrongly that “it took years for the Reagan administration to get taxes done,” and claimed that past presidents hadn’t necessarily contacted bereaved family members to mourn lost service members — before backtracking on that assertion when pressed. He also noted, as he often does, that he won the presidential election last fall, and he implored Hillary Clinton to run again.

In front of a hastily assembled White House press corps, jostling each other on the lawn because there wasn’t time to bring out chairs, Trump began his remarks by saluting McConnell and, as he described it, their longstanding friendship.

“We’re probably now closer than ever before,” the president proclaimed as McConnell grinned stiffly at his side. “My relationship with this gentleman is outstanding.”

Trump’s former chief strategist, Steve Bannon, over the weekend declared all-out political war on the GOP establishment, including McConnell and incumbent Republican senators Bannon has deemed unsupportive of the president’s agenda. Trump said earlier Monday during a Cabinet meeting that he “can understand fully how Steve Bannon feels” and even that some in the party “should be ashamed of themselves.” But he later suggested he might try to talk Bannon out of challenging some Senate Republicans whom McConnell has pledged to defend.

“Some of the people that he may be looking at, I’m going to see if we talk him out of that, because frankly, they’re great people,” Trump said.

Trump’s change in tone suggested that McConnell, whose allies regularly do battle with Bannon, might have talked Trump into intervening during their lunch together.

“Just so you understand, the Republican Party is very, very unified,” Trump insisted.

McConnell took the opportunity to lay out, for the public and for the audience of one standing beside him, why he and GOP allies work to protect Senate incumbents. He argued that some conservative Republicans nominated in the 2010 and 2012 cycles didn’t win because they weren’t able to “appeal to a broader electorate in the general election.”

“You have to nominate people who can actually win, because winners make policy and losers go home,” McConnell said.

Trump briefly pursed his lips as McConnell made those remarks, then took a question on another topic.

Bannon, meanwhile, seemed in no mood to back down. “Senator McConnell and the GOP Establishment have ‘sown the wind — now they reap the whirlwind,'” he said.

Bannon’s Brietbart News site also reveled in the attention. “Bitter Mitch! Triggered by Bannon,” one of its Monday headlines read.

Trump spent August assailing McConnell for his inability to pass legislation to repeal the Affordable Care Act, calling the failure “a disgrace” and ordering McConnell over Twitter to “get back to work.” For his part, McConnell has complained that Trump had “excessive expectations” for how quickly Congress could act.

“Contrary to what some of you may have reported, we are together, totally, on this agenda to move America forward,” McConnell said.

It was not clear what led to Monday’s sudden question-and-answer session, which followed lunch between McConnell and Trump at the White House. Their meeting came at a critical time, with the Senate poised to vote this week on a budget that would set the stage for tax legislation that many Republicans view as make-or-break following the failure on health care. Both McConnell and Trump recommitted themselves to the goal of passing a tax bill by the end of this year.

The last time McConnell was at the White House was early last month. On that occasion, Trump bypassed him and Republican House Speaker Paul Ryan to cut a deal with the Senate’s Democratic leader, Chuck Schumer, and House Minority Leader Nancy Pelosi on debt and spending.

That kicked off a brief period when bipartisanship was in the air in Washington, and it seemed possible that Trump would make common cause with Democrats at the expense of Republicans on other issues, too. But the suggestion of a deal on immigration appears to have fallen apart. Questioned Monday about Schumer and Pelosi, Trump replied: “Well, I hope to have a relationship. If we don’t, we don’t.”

However, he claimed that his recent action to shut off certain payments to insurers under the Affordable Care Act, denounced by Democrats as sabotage, was forcing bipartisan talks. Indeed there may be a renewed focus on Senate bipartisan negotiations aimed at addressing the payments, which go to subsidize costs for low-income people.

“Because of that, people are talking now, Democrats are talking to the Republicans,” Trump said, contending that a short-term fix would be followed next year by ultimate success in repealing “Obamacare,” and asserting with no evidence, as he’s done in the past, that the votes are there now to repeal the law.

Trump also denounced the investigation into his campaign’s involvement with Russia, being conducted by a special counsel and GOP-led congressional committees.

“The whole Russia thing was an excuse for the Democrats losing the election,” he said.

“There has been absolutely no collusion. It’s been stated that they have no collusion. They ought to get to the end of it, because I think the American public is sick of it.”