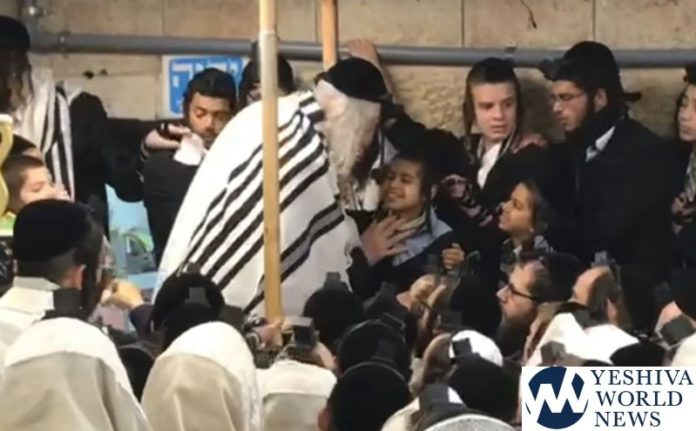 Two weeks ago Rabbi Berland created a new Minhag. YWN published footage of the Rabbi spinning his Draidel a week before Chanukah while in the middle of Davening Maariv. But now, it seems that the Rabbi that thousands are still flocking to for Brachos and Yeshuos has introduced another Minhag.

In the attached footage, we see Rabbi Berland in his Shul wearing his Taalis and Tefillin and Davening Shacharis.

The crowd is standing around him, many of them children. He is seen smearing olive oil on the neck of a child standing next to him while the crowd watches in awe. YWN spoke to a follower of Berland who says (direct quote) “everyone should only be lucky to have the holy Tzadik smear oil on their necks. Many people are known to see great Yeshuos and Segulos from this”.

Additionally, a flyer is being passed around in Shuvu Banim, demanding every boy and girl over the age of 16 to donate 1,000 Shekels each to Rabbi Berland on the last day of Chanukah “Zos Chanukah”.

The announcement (see poster attached below) says that this money is needed to keep Rabbi Berland from going back to jail.

Rabbi Berland was released from house arrest just before Rosh Hashana, the result of a conviction for assault. Berland pleaded guilty to his actions against multiple victims. he had first fled Israel and traveled from country to country, thus avoiding extradition to Israel, where a warrant for his arrest had been issued. He spent time in the United States, Italy, Switzerland, Morocco, Egypt, Zimbabwe, and Johannesburg before being arrested and extradited to Israel where he faced the law. 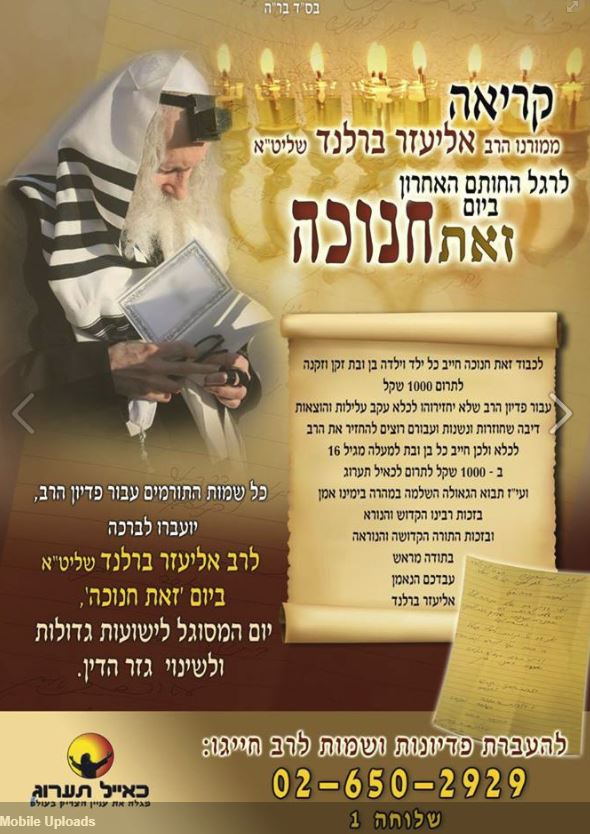