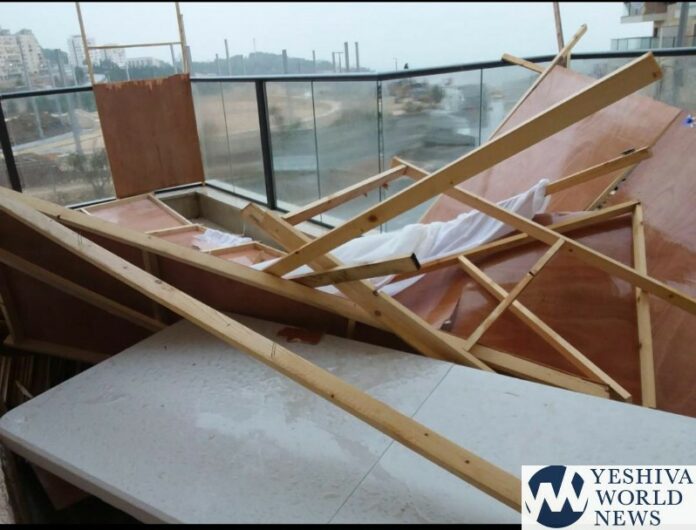 The unseasonal storm that struck Israel mid-day on Tuesday rocked the mostly Charedi community of Har Yona in the Galilee. The community, located near the cities of Nof HaGalil and Nazareth, sees strong winds on a regular basis. Residents built their sukkos knowing that strong winds are common in the community where many buildings are still under construction.

On Sunday evening, a storm began that saw some of the Sukkos in the community destroyed over the first night of Yom Tov. Families whose Sukkos were destroyed were invited to eat at the Shul’s sukkah in the Belzer Beis Medrash.

On Tuesday, as the storm hit its peak and torrential rains poured down across Eretz Yisroel, all of the sukkos in the community were destroyed. Many pergolas, as well as steel enforced balcony covers, were also destroyed by the strong winds and rain. After the storm passed, more than 200 sukkahs were completely destroyed. Chief Rabbi of Nof HaGalil Rabbi Yona Herzl, who lives in the community said that he has not seen a storm cause damage like this in the more than 40 years that he has been a resident of the city. Rabbi Herzl’s Sukkah was also destroyed.

The Dayan for Chasiedi Belz in the city, Rabbi Naftali Offman, instructed residents to wait until tomorrow to begin reconstructing their sukkos. He also instructed the local Tambor (hardware) store to open its doors on Wednesday in order to enable residents to rebuild their sukkos.

The destruction of Sukkos was not limited to Har Yonah. Sukkos were reported destroyed in cities such as Sderot, Netanya and Herzliya.