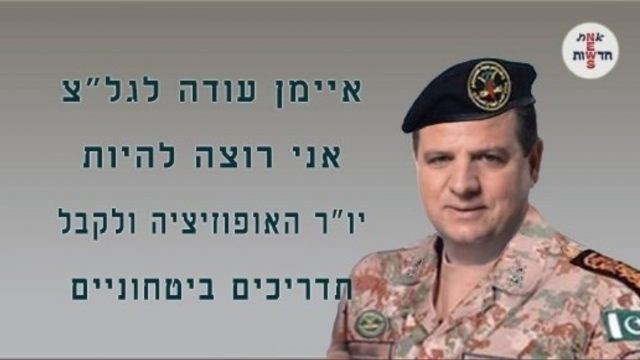 Head of the Joint List in the Knesset, MK Ayman Odeh, has asked the Chief Officer of the Knesset, the Police and the Minister of Internal Security MK Gilad Erdan for a security detail after a photo was published wherein Odeh was shown wearing the fatigues of the Islamic Jihad. The report of the request came from IDF Radio (Galei Tzahal) stating that the photo was making rounds on social media networks where Odeh was depicted as being an activist for the Islamic Jihad while asking to receive security briefings from the Ministry of Defense.

In addition, Odeh claims that he regularly receives death threats and fears for his life. “Creating a photo of Ayman Odeh wearing the uniform of the Al Quds movement and the spreading of such a photo claiming that he is an enemy of the public, is an attempt to fan the flames of incitement against him and bring others to cause him physical harm.”

“History has shown us, that such photos have the power to incite political assassination.” He demanded that the incident be investigated and that the websites that have posted the image be brought to justice.