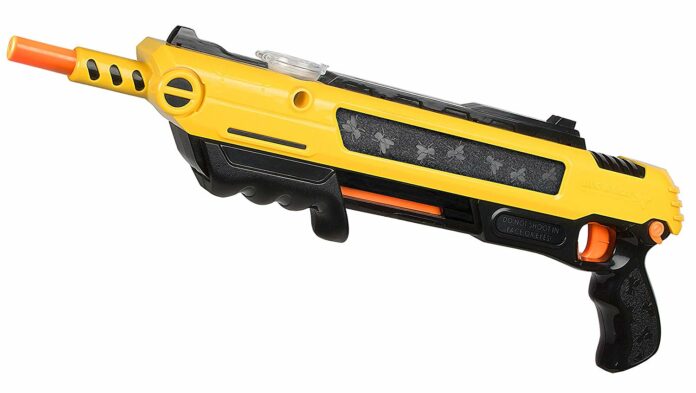 It is a toy, of sorts, or a device – that wives across America are purchasing for their husbands.  Why?  Because now, on account of this man-oriented device (or man-toy) their husbands are busy scouring the entire house eliminating flies, bugs, mosquitoes, drain flies, and other household pests.

“Our apartment was invaded with crickets, and my husband went around to get rid of them,” remarked Dassi from Far Rockaway.  “Now he is willing to do it.  Prior to this he didn’t want to do it.”

For many, however, the purchase is back-firing.  Husbands are so enamored by the device (or toy) that they are actually leaving the door open so that more insects will enter – thus giving them the opportunity to kill more insects.

What is this crazy new device and what are the halachic questions involved that has inspired this article?

Essentially, the Bug-a-Salt is a pump action assault weapon that shoots table salt with a shotgun-like-choke (spread) that can instantly wipe out any bug that is found within three feet of it.  One does not need to aim particularly well, and the fly or bug, just-kind-of-like, instantly dies.  One does not need to waste time to reload the Bug-a-Salt either.  The capful of salt yields some 80 shots or more.

The device has an appeal to the full spectrum of men.  This author tested the appeal with a cross-section of male society.  The appeal is to elderly men, 13 year olds, 21 year olds, Kollel Avreichim, FFBs and Baalei Teshuvah.

So what are the halachic questions?  There are many.

In answering question number one, the general consensus of Poskim is that one is permitted to kill bugs in one’s own home – even though we generally avoid killing Hashem’s creatures.  Rav Moshe Feinstein zt”l deals with this question in Igros Moshe Choshain Mishpat Vol. II #47.  He advises that one avoid killing the bugs with one’s own hands since this can cause a person to become cruel. It is well known, however, that the AriZal would avoid killing bugs – even in his own home (See  Shaar Hamitzvos Parshas Noach and Shaar HaGilgulim 38).

In answering question number two, as to whether or not one may enjoy killing the bug in the house, we defer to a thought expressed by Rav Nosson Tzvi Finkel, the Alter of Slabodka.  We know that Yaakov Avinu was punished with the kidnapping of his daughter Dina because he had placed her in a box so that Eisav would not see her and marry her.   While some say that he was punished because he should have actually had allowed Dina to marry Aisav the Rasha, and thus enable him to improve his character – the Alter of Slabodka learns that it would have been wrong for Yaakov Avinu to do that to Dina.

Why then was Yaakov Avinu punished, if his underlying action was correct?  The Alter answers that he nailed the lid on the box too forcefully.  In other words, he did not feel badly enough for Aisav when he ensured that Dina would not marry him.  It is not just embarking upon the correct actions, but feelings matter as well.

Now, while the comparison between the two cases is dissimilar in the sense that the Alter is discussing a human being, one’s own brother, in fact, we must keep in mind that Hashem has a purpose for every form of life, and expressing enjoyment at the death of even a bug would seem to be wrong.

In answer to question number four whether one may kill an insect on a table, the Chofetz Chaim writes in the Shaar HaTziyun (167:26) that one should not kill an insect on the table because a Shulchan is compared to the Mizbeach of the Bais HaMikdash itself.  Although there may be some exceptions to this, such as if there is someone with a severe allergy to the bug – we should generally follow the Mishna Brurah.

What about question five – spiders? Although there seems to be a Kabbalistic tradition not to kill any spider in appreciation for the fact that Dovid HaMelech was saved from Shaul’s soldiers by a spider, there does not seem to be any halachic source to avoid killing spiders beyond that of killing any other of Hashem’s creatures.  Indeed, this author has not even found the source for the tradition not to kill them.  There is a tradition that one should kill dangerous spiders.

May one use it outside of the home?  Believe it or not, there is a special garden and yard edition of the Bug-a-Salt.  Rav Avigdor Miller, in a tape, explains that while one may kill bugs inside the home – one may not do so outside the home.    The notion of each of Hashem’s creatures has a purpose kicks in outside of the home.

In regard to question seven – does one recite a shehecheyanu (or a hatov vehamaitiv) over the Bug-a-Salt?  The Gemorah in Brachos and the Shulchan Aruch tell us that we do recite a shehecheyanu on a purchase that makes us happy.  Nowadays people do not necessarily recite a blessing over new acquisitions because they no longer excite as they did in previous centuries.  Yet, when one sees how men react to this new toy, er – device, one might think that it may necessitate a bracha.  Rav Yitzchok Zilberstein, however, rules in regard to an electric flyswatter (in his Chashuchei Chemed Shabbos p. 378) that one does not recite a blessing – since it involves killing Hashem’s creatures.  Presumably, the same would apply here.

May  women use the Bug-a-Salt 2.0?  Generally speaking, in regard to real weapons, the verse “lo yehi kli gever al ishah” is applied.  The verse states that the clothing of a man should not be upon a woman.  The Gemorah in Nazir 52a – applies this verse to weapons and the halacha is codified by the Shulchan Aruch (See YD 182:5).  The Gemorah tells us that Yael killed the evil general Sisera with a tent peg instead of a sword because a sword is a weapon.  Does it apply to guns that kill bugs?  It would seem that the shape of it as an assault rifle would fit into the underlying reason for the prohibition.  However, Rav Shmuel Fuerst ruled that a woman may use the Bug-a-Salt since it is not actually a weapon.

Generally speaking, when there is an overwhelming amount of kosher food to non-kosher food in a sixty to one ratio – the food mixture is deemed to be kosher (one just has to remove the non-kosher if it is identifiable).  One may not, however, do so purposefully.  Regarding the issue of ain mevatlim issur lechatchila (see Shulchan Aruch YD 99:5,6), question number nine, when one shoots the Bug-a-Salt onto a fly over a hotdog – the issue of “doubt” arises.  In other words, it is not so clear that the bug juice will make its way out of the fly and into the hot dog or meat product.  The Shach (in YD 92:8) rules that one may negate a prohibition when there is a doubt involved as to whether or not that “one” portion of non-kosher is even there in the first place.  We are unsure in each of these cases whether the salt will penetrate the bug’s body and exit it on the other side.

In answer to question number ten, as to whether the one who uses it to salt his Challah on Shabbos must immerse it in a Mikvah, there may be a parallel case in regard to a question a friend of mine once presented to Rav Chaim Kanievsky and printed in his sefer (VaYishma Moshe Vol. IV Siman 100).  If, after Sukkos, one always makes a jam out of his Esrog, does his Esrog box require tevillah – immersion in a Mikvah?  Rav Chaim Kanievsky ruled that it should be immersed without a bracha.  In our case, however, the Bug-a-Salt does not have metal parts that touch the salt, and thus immersion would not be required.  It should be noted that the Kovaitz Teshuvos MiBais HaLevi cites the Chazon Ish that whomsoever does tovel plastic without a bracha should be blessed – since if these items existed during the times of Chazal – they would have ordained that they be tovelled.  Rav Ovadiah Yoseph in Yechaveh Daat Vol. III #60 rules similarly.

It is hoped that this brief excursion into the halachic aspects of the Bug-a-Salt allowed us to further appreciate the breadth of Torah and halacha and how the lessons of our Torah apply to every aspect of every day life.