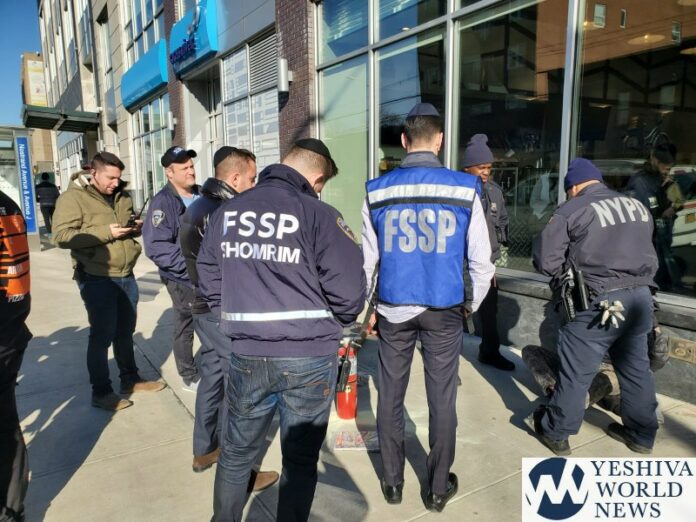 Perhaprs it’s the new bail-reform law or not, but Flatbush Shomrim has been working overtime to keep the community safe.

In under 12 hours, 6 criminals were arrested for various crimes.

It began at around 2:30AM Thursday morning, when volunteers on patrol witnessed a well-known suspect breaking into multiple vehicles on East 28th Street near Avenue R. The man eventually tried stealing a car and had already started the motor. The NYPD’s 61 Precinct responded and took the man into custody. He was in possession of around 5 pairs of high-end sunglasses as well as other items that he had stolen from the vehicle.

On Thursday at around 11:00AM, the Shomrim hotline received a call reporting a man who had broken into a vehicle on East 27th Street near Avenue J. Shomrim responded and found the man walking on Avenue J towards Nostrand Avenue. He walked into Bash Pizza, took a fire extinguisher and walked outside the store where he began spraying it into the air. The NYPD’s 70 Precinct arrived and promptly took the man into custody. YWN notes that the viral rumors on social media that this was a hate crime or that the man sprayed the extinguisher into peoples faces inside the store, are 100% false and typical WhatsApp fake news rumors.

Just minutes later, Shomrim received a hotline call reporting packages being stolen on East 28th Street near Avenue S. Shomrim arrived and witnessed three suspects in two vehicles stealing packages. They were followed while the NYPD’s 63 Precinct arrived. They were taken into custody on Schenectady Avenue and Avenue J. Both vehicle were impounded as well. In this incident, the caller had incredible footage from their “Ring” camera. Shomrim suggests that residents get security cameras on their homes.

At around 2:30PM, Shomrim volunteers spotted a vehicle with a driver who have been plaguing area shuls with burglaries over the past few months. Shomrim is aware of more than a dozen shuls that were burglarized by this suspect. Shormim received many reports of this suspect engaging in other crimes as well.

Yesterday. Just after midnight, we received a call for a pair breaking into vehicles in the area of Quentin Road and East 8th Street. Great #TeamWork with @NYPD61Pct led to them both being arrested. #HereForYou #AroundTheClock pic.twitter.com/lMmmKFSZq4

Shomrim has dozens of volunteers patrolling the streets of all neighborhoods while the community is asleep, and are responsible for many arrests that many never get to hear about.

Shomrim reminds the community to always call 911 immediately if you see something suspicious, and then call your local 24 hour Shomrim hotline. The Flatbush number is 718-338-9797.