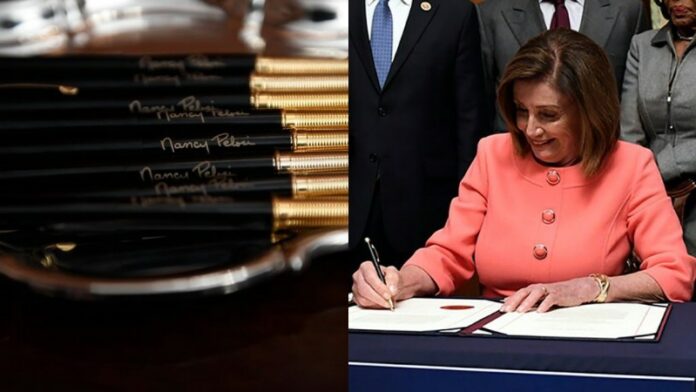 “The House’s hour is over,” Senate Majority Leader Mitch McConnell declared Thursday in a floor speech slamming Democrats for putting on a “partisan performance” celebrating the signing of articles of impeachment by handing out souvenirs and posing for smiling photos.

To critics, the tone of the event seemed celebratory — a far cry from December, when Pelosi wore black and insisted on the House floor it was a “solemn” day before the Democrat-controlled body voted to impeach the president on abuse of power and obstruction of Congress allegations. Later, she even cut short two rounds of cheers from Democrats when the articles were adopted.

In a contrived signing ceremony Wednesday, House Speaker Nancy Pelosi (D-Calif.) signed the articles of impeachment, one letter at a time, using golden pens delivered to her on a silver platter – which she handed out as souvenirs, McConnell said:

“After weeks of delay, the Speaker of the House decided yesterday that a trial could finally go forward. She signed the impeachment papers.

“That took place, at a table with a political slogan stuck onto it.

“And they posed afterwards for smiling photos.