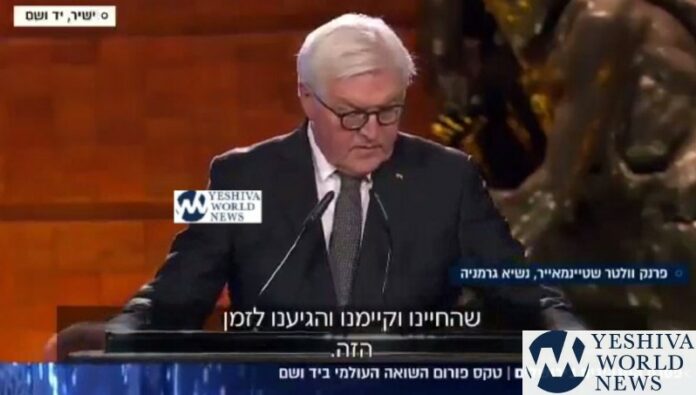 German President Frank-Walter Steinmeier began his speech at the World Holocaust Forum on Thursday by reciting the bracha of Shehechyanu in Hebrew with shem and malchus.

In his emotional speech, Steinmeier expressed concern over continued anti-Semitism, noting a pattern of attacks on Jews in Germany, highlighting a shooting in October on a synagogue in the German city of Halle.

“I wish I could say that we Germans have learnt from history once and for all. But I cannot say that when hatred is spreading,” he said.

“But it is the same evil,” he asserted. “And there remains only one answer: Never again! Nie wieder! That is why there cannot be an end to remembrance.”

Steinmeier said it was important to him to meet with survivors in order to hear about the lives of victims rather than just statistics about the number of victims who died.

The German president said that he always emphasizes Germany’s responsibility for the Nazis’ atrocities and he fights against any attempts to put an end to memorializing the Holocaust.

After Steinmeier sat with the survivors and patiently listened to their stories he told them that it was “a “privilege for a German president to hear about your lives and your survival.”

Steinmeier was the first German president to speak at Yad Vashem during a Holocaust Forum. When Steinmeier visited President Reuven Rivlin on Wednesday he wrote in the guestbook: “It is with gratitude and humility that I accept the hand extended to myself and my country as a sign of reconciliation.”