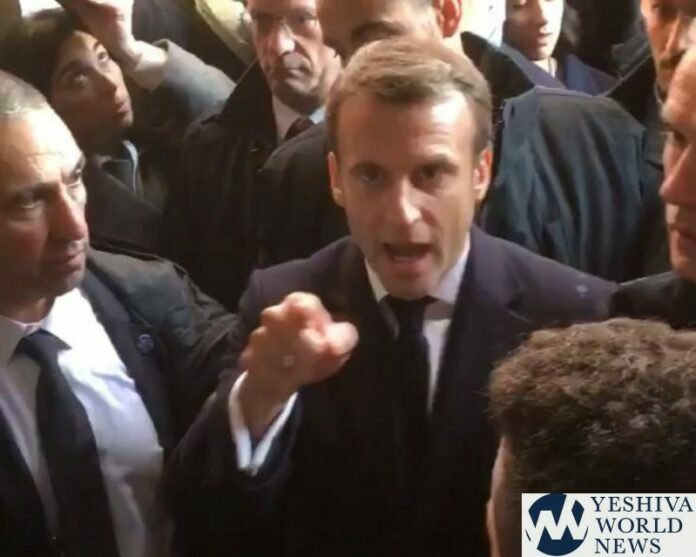 Following French President Emmanuel Macron’s outburst at Israeli Shin Bet security officers outside the Church of St. Anne on Wednesday, several Israeli news outlets said his anger about Israeli security officials entering the church was due to the pro-BDS and anti-Semitic organization that is housed in the church.

No one really knows whether that prompted Macron’s anger or he just has a bad temper but is there is a genuine reason he is so territorial about the church? The Church of St. Anne is a Roman Catholic church in the Muslim Quarter of the Old City of Jerusalem which was given to France by the Ottoman Empire in 1856.

There definitely is a reason and it’s not pretty. What is indeed known about the Church of St. Anne is that it houses a branch of the organization called the Ecumenical Accompaniment Programme in Palestine and Israel (EAPPI). EAPPI, founded by the Geneva-based World Council of Churches (WCC), brings activists to Judea and Samaria as “tourists,” who receive special training and are deployed at Palestinian checkpoints and other sensitive areas to provoke and video confrontations between Palestinians and Israeli soldiers. The “tourists” then return to Europe and use their “first-hand experience and documentation” to advance anti-Israel and pro-BDS campaigns.

The EAPPI activities, which are branded as working toward a “just peace” between Palestine and Israel, is completely slanted and one-sided with the only goal being to video “Israeli oppression of Palestinians” while completely ignoring the presence of anti-Israeli and pro-violence propaganda in Palestinian society, not to mention outright terror. Activists are required to have experience with video and digital tools in order to document the “Israeli oppression” and transfer the material for anti-Israel incitement campaigns as well as have connections with church or political groups in Europe to use as platforms for anti-Israel campaigns.

DMU, an organization that monitors the WCC’s actions in Israel, stated: “The French government has been tied over and over to activity against the state of Israel. In March 2018, a [French] embassy employee was caught smuggling weapons into the Gaza Strip. In July 2019, the French consulate chose a terrorism activist to manage a camp on its behalf in east Jerusalem. Throughout this time, the government continues to provide day-to-day protection to BDS activists. The French government should be pressured to end the free-reign of these activists and remove them from the compound.”

A report by NGO Monitor in 2019 called “EAPPI: The World Council of Churches’ Training Camp for Anti-Israel Advocacy” said that the EAPPI has brought 1,800 volunteers to Judea and Samaria to “witness life under occupation” – something the WCC does only in Israel and not in any other conflict zone throughout the world.

“Despite marketing itself as a human rights and protection program, EAPPI places significant emphasis on political advocacy before, during, and after the trip,” the NGO report states. “When volunteers return to their home countries and churches, they engage in anti-Israel advocacy, such as BDS (boycott, divestment, and sanctions) campaigns and comparing Israel to apartheid South Africa and Nazi Germany.”

“EAPPI partners with a number of political NGOs in the region, including groups that support BDS campaigns against Israel and/or that accuse Israel of ‘war crimes.’”

Furthermore, a senior source told TPS in 2019 that EAPPI activists have directly supported terrorism. EAPPI activists visited the family of Palestinian terrorist Omar al-Abed, who murdered Yosef Salomon, his daughter Chaya, and his son Elad at their home in Neve Tsuf in July 2017. The visit was only a few days after the attack and the activists even gave the family money!

Since the EAPPI program is located in St. Anne’s compound under French jurisdiction, it enjoys diplomatic immunity from Israeli law enforcement officials and Israeli security officials are not allowed to enter the church without the permission of the French government. In other words, France is providing diplomatic power to anti-Israel and pro-Palestinian campaigns in the heart of Jerusalem’s Old City.

In 2016, the Christian Empowerment Council (CEC) wrote a letter to the French Ambassador to Israel complaining about the French diplomatic protection granted to EAPPI, according to a Jerusalem Post report.

“I think that the fact their office is in the area under the auspices of the French government is serious and represents inappropriate relations between friendly nations,” CEC’s leader, Father Gabriel Naddaf, wrote: “The French government should take them out of the compound under its territory immediately and without delay and to stop assisting the organization, which is operating illegally.”