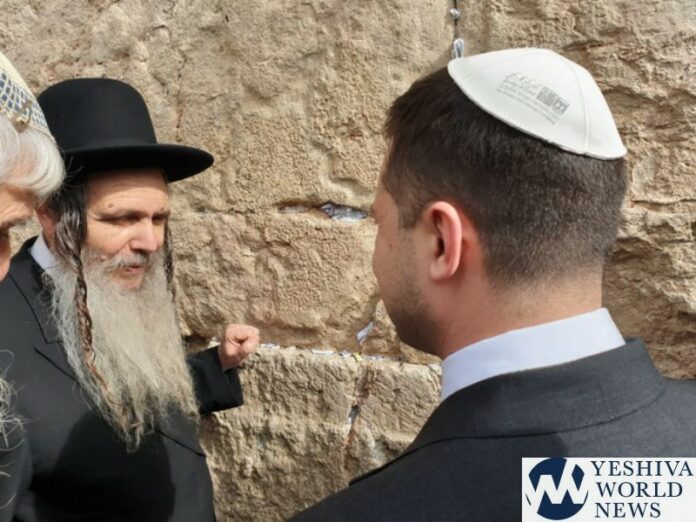 Ukrainian President Volodymyr Zelensky arrived in Israel for the first time since he was elected as president on Thursday morning at 4 a.m. and was greeted by Minister Ze’ev Elkin. Shortly later, he announced that he and his delegation are giving up their seats at the World Holocaust Forum to Holocaust survivors on Thursday.

“We learned that many of the Holocaust survivors have not been able to visit the World Holocaust Forum,” Zelesnky wrote on Twitter. “Our delegation gave them our seats, as many Israeli ministers did. These people deserve these honors most of all. We will participate in all events and hold scheduled meetings.”

Yad Vashem criticized Zelesnky’s announcement and stated that his decision is “puzzling.”

“This morning, the Ukrainian president announced that he is revoking his participation, claiming that he is transferring his seat to a Holocaust survivor,” Yad Vashem said in a statement.

“It was explained to the president that we have responded to survivors who approached us in recent days…” Yad Vashem stated. “Therefore, his decision is puzzling, and it’s a pity to take such a step for an event entitled ‘Remember the Holocaust to fight anti-Semitism.’” Yad Vashem also said that it isn’t possible to transfer seats to Holocaust survivors at the last minute.

Only about 30 Holocaust survivors were expected to participate in the World Holocaust Forum at Yad Vashem according to a report on Monday by Army Radio.

Instead of attending the Forum, Zelensky visited the Kosel, Kikar H’Shabbos reported.

After the tour, the rabbanim said pirkei Tehillim with the president.

Rav Arush has a close connection with Zelensky since he was elected as president about a year ago. Last Elul, Rav Arush traveled to Ukraine and met with Zelensky, the governor of the Uman district and the mayor of Uman and asked them to improve conditions for the Jews who travel to Uman for Rosh Hashanah.