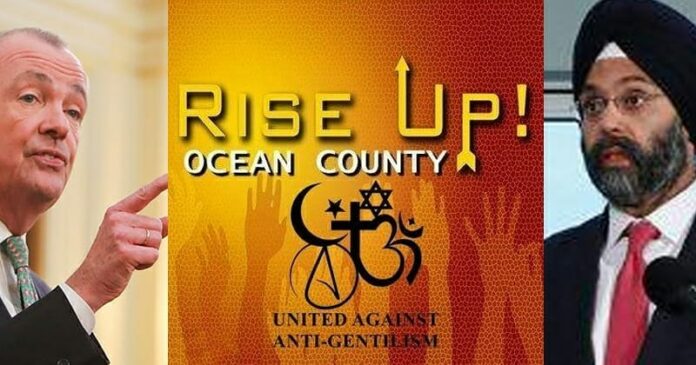 After lots of effort to shut down a vile anti-Semitic Facebook page operating in Ocean County (near Lakewood), New Jersey Governor Phil Murphy and Attorney General Gurbir Grewal today announced that Rise Up Ocean County has been shut down permanently.

“We just learned that Facebook has decided to take down the public page on the company’s social network called ‘Rise Up Ocean County.’ Facebook’s action comes ten months after the Director of our Division on Civil Rights, Rachel Wainer Apter, first sent a letter to Facebook expressing concerns about racist and anti-Semitic statements on the page. Since then, we’ve consistently and repeatedly made clear our view that the page appeared to violate Facebook’s terms of service, and we appreciate that Facebook has now decided that this kind of hateful rhetoric has no place on its platform.

“There remains much that should be done to stop the spread of hate on the Internet. The Murphy Administration will continue to call out hate whenever and wherever we see it, we will persist in demanding meaningful reforms to address the proliferation of hate online, and we will continue working to make New Jersey a safe and inclusive place for all of our residents.”

According to Shore News, “Rise Up Ocean County” has been aligned with “Jackson NJ Strong” which the Attorney General’s efforts are also being monitored for possible action.

Rise Up Ocean County, in recent court filings is alleged to be loosely affiliated with the Jackson Township Republican Club, which has faced criticism of its own including three discrimination lawsuits, multiple forced resignations from public positions and a media campaign targeting the club by high profile national GOP donor Dr. Richard Roberts.