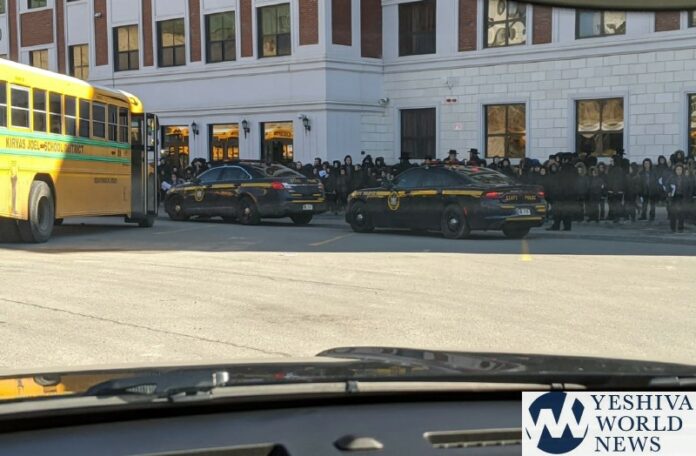 A Rebbe in a Kiryas Joel Yeshiva was arrested on Friday. The crime? Hitting a child.

Sources tell YWN that the 13-year-old child was hit by his Rebbe, and the child immediately called the police to file a complaint.

The NY State Police arrived at the Yeshiva, and after an investigation, took the rebbe into custody.

A photo of the NY State Police outside the Yeshiva quickly went viral.

It appears the rebbe has since been released.

Recently, YWN reported about another incident where a Rebbe struck a child, and published a Halachic analysis by Rabbi Yair Hoffman if this is permitted.

The following is the analysis:

There is more. A 1970’s Supreme Count ruling called, “Ingraham v. Wright,” rules in favor of the right of a school to spank children. In it, the Supreme Court upheld the constitutionality of corporal punishment in schools by a 5-4 vote. In that ruling, Justice Lewis Powell explained that the Eighth Amendment of the US Constitution was written only to protect the rights of convicted criminals, but not to schoolchildren confined to school.

Yes, you read that correctly.

Judge Powell further explained that in cases where corporal punishment crosses the line from a mere paddling to a severe beating, parents can sue in civil court and also bring up criminal charges for battery.

THE THINKING BEHIND IT ALL

What is the thinking behind allowing a school to spank? Apparently, those who support it claim that it is a quick method to restore order and learning – particularly for an offending student. There is no need for suspension when this type of punishment will get the young man back in line. Opponents feel that it can do some very serious harm.

But what is the halacha? Where does Jewish law stand in all of this?

In Mishlei (19:17) we read the advice of Shlomo HaMelech: “yaser bincha v’yanichecha – Chastise your son and he will give you rest, and he will grant pleasures to your soul.” But what does chastise here mean?

In Yore Deah 245:10, the Mechaber rules that one may only implement corporal punishment if one does not do it cruelly. He states that it must be done with a shoe lace, a small retzuah. In other words, a paddle is explicitly forbidden to be used by the Shulchan Aruch. This requirement that it be a shoelace strap is found in the Gemorah in Basra 21a.

Kicking a child would also be forbidden by the Shulchan Aruch. The punishment that is given may not be “makas oyev – the striking of an enemy” nor “mussar achzari –cruel punishment.” Indeed, the Chazon Ish (Yore Deah 2:16) writes that in contemporary times even this should not be done.

THREATENING WITH A PADDLE

Rav Moshe Feinstein zt”l (Igros Moshe YD Vol. IV #30) rules that not only is the use of a paddle or stick forbidden, but even threatening with the use of it is forbidden. He also rules that in contemporary times, corporal punishment should not be done. The Rambam in Hilchos Talmud Torah did advocate a form of gentle but physical spurring on to facilitate more learning. Rav Feinstein’s approach, however, follows another view.

POSSIBLE UNDERSTANDING OF THE CHAZON ISH AND RAV MOSHE

SO what is different about contemporary times from earlier times where a limited non-cruel form of gentle corporal punishment would be permitted? This author would like to suggest two changes. Firstly, the amount of people that would rationalize their own particular brand of corporal punishment as not being excessive (when it actually is) has risen. It is just not worth the risk if we allow it. Secondly, the loving manner in which it should be done has perhaps changed too.

It is know that Rav Yaakov Kamenetzky and Rav Yaakov Ruderman both grew up in the same town and attended the same Cheder. They once noted that their cheder Rebbe used excessive corporal punishment and that of the entire cheder only the two of them remained observant.

The Rav Shulchan Aruch (Hilchos Talmud Torah 1:13) rules that a teacher who uses excessive corporal punishment is in violation of a Torah prohibition. He states that he is no different than anyone else who strikes another person.

The Maharsha in Kesuvos (50a) explains that there is a certain age limit where corporal punishment is limited and only verbal punishment must be used. The ruling of the Maharsha also appears in the Chiddushei Aggadah to Bava Basra 21a. The child appearing in the video is said to be 14 years old – above the age of the Maharsha’s rulings.

PLACED UNDER THE BAN AND DAMAGES

The Pischei Teshuvah cites a ruling of responsum Kiryas Chana (Siman 22), where a teacher struck a student so hard that the child’s leg was broken. The responsum ruled that the teacher must be placed under the ban until he pays the child the equivalent of the “Five Payments” enumerated in the 8th chapter of Bava Kamma – nezek (damage), tza’ar (pain), ripui (medical bills), sheves (unemployment), and boshes (embarrassment). The Kiryas Chana would understand the Gemorah that exempts a Rebbe from galus in the extreme case discussed in the Gemorah as applying only to galus but not to the five payments. Also, the various psukim in Mishlei that indicate a form of corporal punishment are possibly metaphorical as Rav Shlomo Volbe zt”l has written.

THE RULING OF THE SHVUS YAAKOV

Is the ruling cited the Pischei Teshuvah authoritative? It seems that the Shvus Yaakov (Vol. III #140) dissents about the matter of obligating him in payment. The Shvus Yaakov rules that the teacher is exempt from the monetary payment of four payments but is obligated in the medical bills. Thus, in the matter of actual payment there is a debate among the Achronim. Regardless, the monetary issues must conform with the contemporary application of the Five Payments as cited in Shulchan Aruch Choshain Mishpat (1:2).

The Midrash Rabbah (Parshas Nasoh 12:30) cites a remarkable Midrash involving Rabbi Abahu – which, depending on the interpretation, foreshadows the long term damage that corporal punishment can have on the recipient. Rabbi Abahu saw someone running with a wooden stick but also perceived a spiritual mazik also running along with an iron stick. Rabbi Abahu told the former not to strike the other lest he die. The man responded, “He is going to die just from a wooden stick?” Rabbi Abahu then told him about the spiritual mazik alongside him.