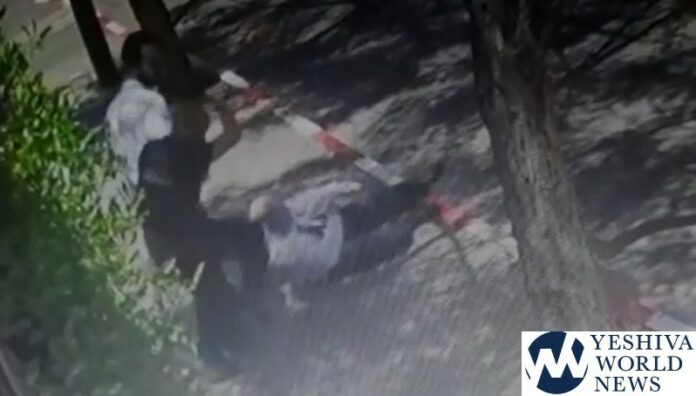 Netanel Engel, a man who volunteers with the police and Magen David Adom was seen throwing to the ground and kicking a Rabbi in Petach Tikvah. The video which was posted to Twitter by a number of people and media outlets, shows Engel, carrying a gun, and attacking Rabbi Dovid Pick (65). Pick is the Rosh Kollel of Avi Ezri, a Kollel on Arlozorov Street in Petach Tikvah.

Following the altercation, a number of avreichim arrive and separate Engel from Rabbi Pick.

According to another post on Twitter, Engel had previously complained about certain individuals who refused to wear a face mask and went “from shul to shul in the neighborhood without wearing a mask laughing at anyone who told him to wear one.”

The video of the attack shows Rabbi Pick responding verbally to something said off-camera, which appears to have caused Engel’s violent attack. One of the community members told Israeli media outlet JDN that “Ever since the Covid-19 outbreak, Engel often harasses members of our community claiming that they are not following the rules. He harassed every person who was not wearing a mask in accordance with how he saw fit. This was in spite of the fact that the majority of the people in the community do follow the rules.”

In the video, Engel himself was not wearing a mask.

As Engel always carried a gun, many people in the community are worried about their safety. “If a person who has violent tendencies such as this and cannot control himself to the point where he will violently and physically attack an old Rabbi, who is to say that one day he won’t be any less sound of mind and simply use his gun against us. Our first demand is that his gun license should be revoked.”