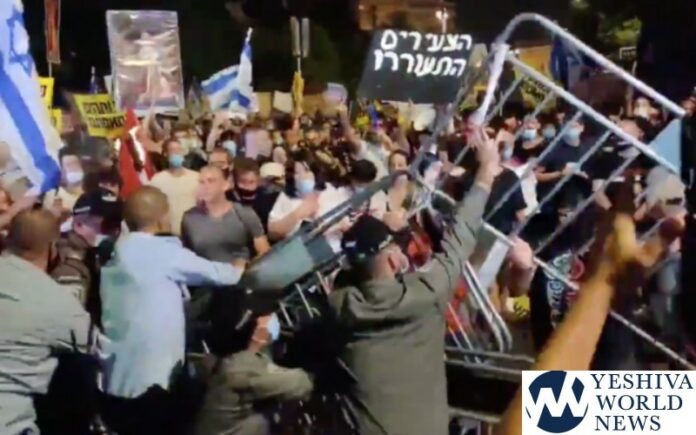 At a massive rally outside the Prime Minister’s residence in Jerusalem turned ugly after protesters began throwing bottles and eggs at police officers securing the protest. Photographers covering the protest were also targeted by the projectiles.

The protest, which was termed the “Bastille Protest”, because it is held on “Bastille Day” saw protesters clash with police officers, while some even attempted to break into the Prime Minister’s residence.

The “black flags” group organized the tonight and said that, “The accused Prime Minister has no time to deal with the most severe economic crisis of our generation.”

“Hundreds of thousands of self-employed are collapsing under the dysfunction of the Netanyahu government, a government that’s busy from morning to evening with the trial of defendant Netanyahu,” they added.

According to them, “if he’s still responsible towards the citizens of the State – he must resign and give the reins to those who have time for state affairs.”

Bastille Day is the common name given in English-speaking countries to the national day of France, which is celebrated on July 14th each year.

The French National Day is the anniversary of Storming of the Bastille on July 14th, 1789, a turning point in the French Revolution.