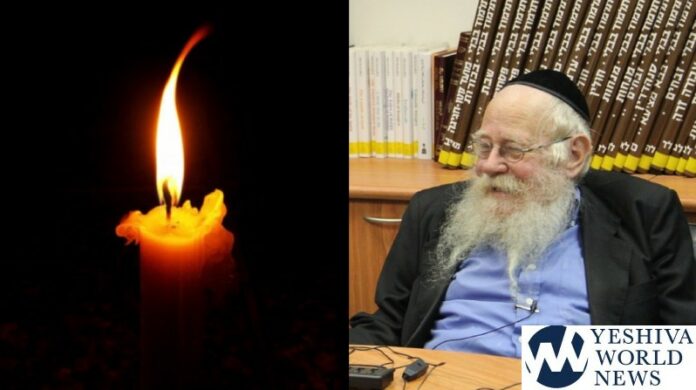 YWN regrets to inform you of the Petira of HaRav Adin Even-Israel Steinsaltz ZT”L. He was 83.

Rav Steinsaltz had been hospitalized with a lung infection and his condition deteriorated until his passing early Friday morning. The kevura was held on Har HaZeisim.

Rabbi Steinsaltz served as the president of Yeshivat Makor Chaim and Yeshivat Tekoa. He has written an easy to understand explanation of the Gemara as well as a host of other sefarim.

His lifelong work in Jewish education earned him the Israel Prize, the highest honor in the State of Israel. In all, Rabbi Steinsaltz authored over 60 books and hundreds of articles on a multitude of subjects.

Born in Jerusalem in 1937 to secular parents, Rabbi Steinsaltz studied physics and chemistry at the Hebrew University. He established several experimental schools and, at the age of 24, became Israel’s youngest school principal. His father was a great-grandson of the first Slonimer Rebbe.

Continuing his work as a teacher and spiritual mentor, Steinsaltz established Yeshivat Mekor Chaim alongside rabbis Menachem Froman and Shagar in 1984, and Yeshivat Tekoa in 1999. He also serves as president of the Shefa Middle and High Schools. He has served as scholar in residence at the Woodrow Wilson International Center for Scholars in Washington, D. C., and the Institute for Advanced Study in Princeton. His honorary degrees include doctorates from Yeshiva University, Ben Gurion University of the Negev, Bar Ilan University, Brandeis University, and Florida International University. Steinsaltz is also Rosh Yeshiva of Yeshivat Hesder Tekoa.

Being a follower of the Lubavitcher rebbe ZT”L, he went to help Jews in the Soviet Union assisting Chabad’s shluchim network.

With great sadness and a heavy heart, the Steinsaltz Center regrets to announce the passing of our beloved Rav and teacher Harav Adin Even Israel Steinsaltz obm
The funeral will be broadcasted on the website:https://t.co/CFYEFqBP70

Our hearts mourn the passing of Rabbi Adin Even Israel Steinsaltz זצ"ל. He was a man of great spiritual courage, deep knowledge and profound thought who brought the Talmud to Am Yisrael in clear and accessible Hebrew and English.
May his memory be a blessing.
יהי זכרו ברוך. pic.twitter.com/1aDMproEiO

The Jewish people and the Jewish state mourn the loss of one of our greatest teachers, Rav Adin Steinsaltz, who made the Talmud’s wisdom accessible to millions. May his memory be a blessing.

I send my deepest condolences to the Steinsaltz family and the Rabbi's students in Israel and around the world.

May his memory be blessed.