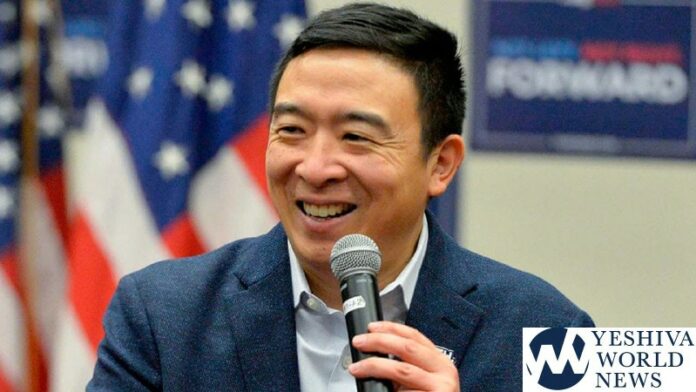 Former Democratic Presidential candidate Andrew Yang appears to be nearing an announcement to run for mayor of New York City.

A video posted to Twitter on Wednesday afternoon appeared to show Yang shooting footage for an announcement to run for the top spot of the big Apple. In the video, Yang – who turns 46 in January – states to the camera, “I’m Andrew Yang, and I’m running for Mayor of New York City!”

In another sign of things to come, Yang was spotted earlier in the day with a film crew at a hair salon in the city with a mask that read “Forward New York.” This possible campaign message could be inspired by Yang’s “Humanity Forward” campaign slogan – one that catapulted him from a relatively unknown businessman to a political phenomenon.

Yang filed paperwork last Wednesday with the city’s Campaign Finance Board, a move that allowed the New York City native to begin raising money to grab the Gracie Mansion position.

Rumors that Yang would run for mayor have swirled for months. A recent survey from Public Policy Polling found Yang was the top choice among potential Democratic mayoral candidates in New York City. When potential voters were asked who they would vote for, 17% chose Yang. Eric Adams, the borough president of Brooklyn, garnished 16% of support in the poll.

Meanwhile, in an issue that is sure to raise eyebrows among the large Orthodox Jewish population in NYC, is Yang’s strong public stance against circumcision.

The Democratic candidate revealed in a little-noticed tweet last week that he was against the ritualized practice of cutting a newborn’s foreskin. But in an interview with The Daily Beast, he said that if he were elected he would incorporate that view into public policy, mainly by pushing initiatives meant to inform parents that they don’t need to have their infants circumcised for health reasons.

“It’s sort of pushed on parents in many situations,” Yang said, describing pressure to circumcise a child as a “cultural onus” imposed on families.

Yang said he had initially planned to have his sons circumcised, fearing they’d be “self-conscious” if they still had their foreskins. But his wife convinced him otherwise.

“From what I’ve seen, the evidence on it being a positive health choice for the infant is quite shaky,” said Yang, who did not address whether he’s circumcised himself.

If elected, Yang said he wants to “inform parents that it is entirely up to them whether their infant gets circumcised, and that there are costs and benefits either way.”

Yang spotted in Coney Island tonight: “I’m Andrew Yang and I’m running for mayor of New York City. Can you dig it? Can you diiiiig iiiiit.” #yangfornyc #YangGang pic.twitter.com/MOViMul9K2

Yang said he didn’t want to talk, his staffer said he had to go and he jogged across the street and hopped in a van pic.twitter.com/PXFTmc3r7J