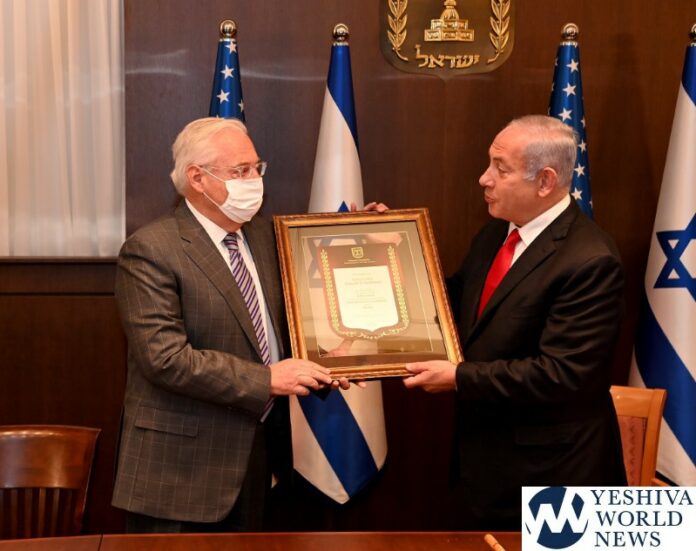 Israel’s Prime Minister Binyamin Netanyahu praised US Ambassador David Friedman for “establishing the deep ties between Israel and the US, in correcting the diplomatic injustices that were created over the years in global diplomacy regarding Israel and in establishing the status of Jerusalem as the capital of Israel,” in farewell remarks on Sunday at the start of the weekly Cabinet meeting.

Following are Prime Minister Benjamin Netanyahu’s remarks at the farewell for US Ambassador David Friedman at start of the Cabinet meeting, today:

“Today we are taking our leave from US Ambassador to Israel David Friedman. I must say that over the years I have met many ambassadors from many countries, including from the US, our great ally, but I can say that there was never a better ambassador than David Friedman in establishing the deep ties between Israel and the US, in correcting the diplomatic injustices that were created over the years in global diplomacy regarding Israel and in establishing the status of Jerusalem as the capital of Israel, and many other things some of which have yet to be told.

David, I do not know, when you were appointed ambassador, if you knew the mark you would leave behind, but today we all know it. We know that you were very active in bringing about the American recognition of Jerusalem as the capital of Israel, itself a correction of an injustice that is difficult to understand.

You not only did his but you acted quickly on the transfer of the American embassy to Jerusalem and on the fact that in American passports it will be written ‘Jerusalem – Israel.’

What could be simpler, what could be more just, than correcting this injustice? This nonsense was corrected after decades due to vigorous action by President Trump and with your encouragement and at your initiative. This is the first thing.

The second thing, you also acted to encourage recognition of our sovereignty over the Golan Heights, which is also so natural and so necessary both from the perspective of justice and that of our security. You acted to correct this as well.

Attended a very moving meeting this morning of the Israeli cabinet; received warm wishes and thanks from many ministers of different parties and a touching send off by @IsraeliPM Netanyahu who presented me with a beautiful award. So touched and grateful! pic.twitter.com/gxBkq3ra3c

Third, you acted together with Secretary of State Mike Pompeo to change the approach toward the communities in Judea and Samaria, to make it clear that our presence there did not contravene international law. Moreover, you also changed the definition of Judea and Samaria from occupied territories to disputed territories and this is exactly the precise definition until it was twisted by elements hostile to Israel and hostile to truth.

Moreover, you also acted, like we did at Ariel University, so that the scientific agreements between Israel and the US would also apply to the communities beyond the Green Line, and it is good that they do.

And there are two more very big things. You were a central element in planning and formulating the Trump Plan, which is the first serious plan for achieving a realistic peace between Israel and the Palestinians. What it has beyond security is – first of all – the need for the Palestinians to recognize the State of Israel as the national state of the Jewish people.

The absence of this recognition is the root of the conflict. This is what has been maintaining this conflict for over 100 years since before the establishment of the State of Israel: The denial of the Balfour Declaration, the denial of the partition plan, the denial of all those signs and steps that would recognize our right to a national state of our own in our historic homeland.

You also worked beyond this to expand the circle of peace and cancel the Palestinian veto that stemmed from denial of the State of Israel, in effect to wreck this veto and overcome it so that we would be able to reach peace with countries in the Arab world and the four peace agreements we made over the last four months as well as those hat will come afterward. They are the result of our joint effort, mine, President Trump’s, the able team led by Jared Kushner which also included you of course, also Aryeh, who is here, Jason Greenblatt, Avi Berkowitz and others.

This was a great effort that is good for the US relations, good for Israel and good for peace. For all these David, thank you very much.”

We know the depth of your feeling for the American-Israel alliance, for the State of Israel, for Jerusalem.

We’ve also made history by resisting Iran’s attempts to achieve nuclear weapons. These are two fundamentally opposed forces – the forces of peace, moderation and progress and the forces of aggression, genocide and terror.

This is something that we have joined forces with. You have been an active participant in. And I thank you for not only your personal friendship but for your enormous contribution for prosperity, security and peace.

I don’t want to involve you in any more in the details of our deliberations, but I do want to say that you have been a magnificent friend, a great personal friend, you and Tammy to Sara and me.

We are really appreciative of your love for Israel, your commitment as an American patriot to strengthening America, to strengthen freedom, to fight for the common values that bind Americans and Israelis together. And I think no one has done it better than you. So thank you.”