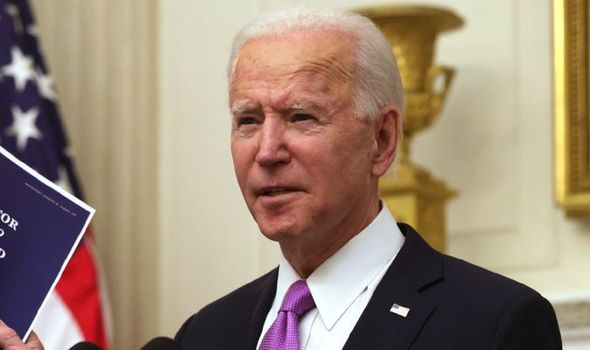 Georgia conservative Rep. Marjorie Taylor Greene Thursday made good on her promise to file articles of impeachment against President Biden.

The freshman Republican, who has supported QANON conspiracy theories and criticized the 25,000 National Guard deployed to Washington D.C. to protect the presidential inauguration, took to Twitter to make her announcement.

“I’ve just filed articles of impeachment on President Joe Biden, we will see how this goes,” Greene said.

“President Joe Biden is unfit to hold the office of the Presidency. His pattern of abuse of power as President Obama’s Vice President is lengthy and disturbing. President Biden has demonstrated that he will do whatever it takes to bail out his son, Hunter, and line his family’s pockets with cash from corrupt foreign energy companies.

President Biden is even on tape admitting to a quid pro quo with the Ukrainian government threatening to withhold $1,000,000,000 in foreign aid if they did not do his bidding. President Biden residing in the White House is a threat to national security and he must be immediately impeached.”

The case against President Joe Biden is vast and detailed:

Joe Biden abused the power of the Office of the Vice President, enabling bribery and other high crimes and misdemeanors, by allowing his son to influence the domestic policy of a foreign nation and accept various benefits—including financial compensation—from foreign nationals in exchange for certain favors.

The evidence of widespread knowledge, corruption, and collusion on behalf of the Biden family with foreign nationals is clear and compelling.

As Vice President, Joe Biden was the senior Obama Administration official overseeing anti-corruption efforts in Ukraine. Hence, any illegal activity involving corruption conducted by Hunter Biden within or in relation to Ukraine would fall under the purview of the Office of Vice President Biden and the Obama State Department’s anti-corruption efforts. In fact, many State Department officials within the Obama Administration repeatedly registered reservations about Hunter Biden’s role on the board of a corrupt company. Thus, any instances of corruption on behalf of Hunter Biden via his role as a board member of the Ukrainian-operated Burisma energy firm were intentionally not investigated or covered up.

In 2016, Ukraine’s top anti-corruption prosecutor, Viktor Shokin, had an active and ongoing investigation into Burisma and its owner, Mykola Zlochevsky. At the time, Hunter Biden continued to serve on Burisma’s board of directors. According to news reports, then Vice-President Biden “threatened to withhold $1 billion in United States loan guarantees if Ukraine’s leaders did not dismiss [Shokin].” After that, Ukraine’s Parliament fired Shokin.
During his father’s vice presidency, Hunter Biden built many business relationships with foreign nationals and received millions of dollars from foreign sources, seemingly in exchange for access to his father. The financial transactions which Hunter engaged in illustrates serious counterintelligence and extortion concerns relating to Hunter Biden and his family.

President Biden gravely endangered the security of the United States and its institutions of government. Through blatant nepotism, he enabled his son to influence foreign policy and financially benefit as a result of his role as Vice President. He supported his son engaging in collusion with Chinese Communist party-linked officials. He allowed his son to trade appointments with his father and other high-ranking administration officials in exchange for financial compensation. He permitted his son to take money from Russian oligarchs, including Elena Baturina, the wife of the former mayor of Moscow.